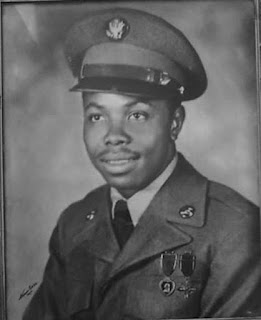 Edward O. Cleaborn of Memphis, Tennessee got far more adventure than he imagined when he joined the U.S. Army in February 1950.  He shared the same fate as Philip Hughes, in that they both enlisted at age 17 and found themselves cast into the early days of the Korean War.  Like Philip, Cleaborn survived the Battle of Taejon on July 20, 1950 when the U.S. Army was thoroughly humiliated by the North Korean People’s Army. These men, both holding the rank of private, were committed to the ensuing Battle of Naktong Bulge a few weeks later.

Philip and Edward would lose their lives in combat, with their remains returned home for interment. But while Philip’s return to Washington, DC was hardly noticed, the City of Memphis feted Private Cleaborn with a large scale memorial service in February 1951.  The reception was certainly justified; Cleaborn was bestowed with a Distinguished Service Cross (among other decorations) for the action in which he was killed.

On August 15, 1950, he was part of an infantry platoon that maintained a tenuous hold on a 400-foot-tall ridge just east of the Naktong River.  Decimated by enemy fire throughout the early morning, Cleaborn’s platoon had seven men not yet killed or wounded.  As casualties were being evacuated, Cleaborn and the others fired from a trench atop the ridge line in an attempt to hold off the encroaching enemy. SFC Roy E. Collins led these men.

Cleaborn’s view of the battlefield was compromised by the rough terrain. Intent on neutralizing a North Korean machine-gun team, he climbed atop the ridgeline to fire from a standing position. Cleaborn yelled at his adversaries while expending clips of ammunition at a prodigious rate. “Come on up, you sons of bitches, and fight!”  By mid-morning, with the enemy closing in on their position, Sgt. Collins ordered his men to fire off one more clip of ammunition and pull back, carrying wounded with them. Deciding to cover his colleagues’ withdrawal, Cleaborn once again stood atop the ridge to enhance his field of fire.  That’s when he took a bullet to the head.

Today, Private Cleaborn’s descendants are lobbying for him to receive a posthumous Congressional Medal of Honor.  News about this can be found online.  All parties involved in this effort may wish to note Private Cleaborn’s correct unit affiliation.  For whatever reason, current day articles describe Cleaborn, an African-American, as a member of an “all-black combat unit.”  This is a mistaken conclusion, and it’s easy to see why.

When the Korean War started in 1950, the U.S. Army had yet to implement President Truman’s 1948 executive order calling for the integration of racially separate units.  Follow these designations closely: among the units sent to Korea was the all-black 24th Infantry Regiment, a component of the 25th Infantry Division.  By coincidence, the (white) 24th Infantry Division was the first U.S. Army division sent to Korea. One component of the 24th Division was the 34th Regiment.


So how did this happen?  Faced with the emergency in Korea, the U.S. Army endured manpower shortages so acute that it found segregated assignments to be impractical.  The Army required trained soldiers as soon as they completed basic training. Accordingly, Cleaborn was notable for something in addition to his heroism: he was one of the very first African Americans to integrate a previously all-white infantry unit in Korea.  In fact, as a member of second platoon, Company A, First Battalion of the 34th Infantry Regiment, Cleaborn died covering the withdrawal of white troops.  His story is a subplot in Russell A. Gugeler’s “Combat Actions in Korea.” Cleaborn’s casualty record also corroborates the unit affiliation described here.  That is also online in the National Archives’ Korean War Casualty File.
Posted by Christopher Russell at 6:55 PM No comments: 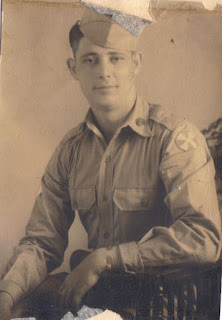 C. 1950, Japan.  The story of Junior Israel Moats exemplifies the capriciousness of fate that led young American boys to join the Army and wind up on occupation duty in post-war Japan.  Junior was born on January 29, 1928 in the corner of West Virginia that borders both Maryland and Pennsylvania.  He was the third of eight children born to Grant and Theodosia Moats.  The two brothers that followed him died in infancy.  Theodosia died in 1935.  Then in 1948, when Junior was 20, his father died. At that point, Army enlistment made a lot of sense: Uncle Sam promised each soldier "three hots and a cot."  In this portrait, Junior sports an Eight Army patch on his left shoulder, which pretty much guarantees that this image was taken in Japan.  Junior went to Korea with B Company, 34th Infantry along with Philip Hughes. Records show that Junior was wounded twice in battle.  The first event was on July 19, with a recuperation period that restored him to B/34's roster on August 15.  The second incident was September 10, just two days before Philip Hughes was killed in action.  Junior returned to duty on September 20 and survived the rest of his tour in Korea.  Upon his return to West Virginia, he married and had three children.  Junior died of unknown causes in 1966 at the young age of 38.
Posted by Christopher Russell at 10:21 AM No comments: 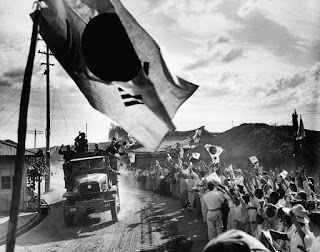 1950. South Korea.  Civilians line the roads to cheer truck-borne American forces advancing to the front. Curiously, the Koreans' wave was not a side-to-side motion, but rather a circular, winding gesture.  But all that aside, Korean civilians were accustomed to armies coming to invade their land. Japan's occupation of Korea during the early 20th century set a ruthless example of domination that schooled the opposing factions enmeshed in the struggles of 1950-53. Civilians learned that showing visible support to invading armies was a matter of life and death.
Posted by Christopher Russell at 2:20 AM No comments: 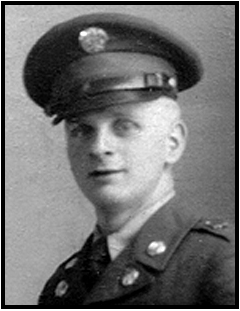 PFC Charles Michael “Chuckie” Skero was one of the first American troops sent to Korea upon the outbreak of war there in 1950.  He served with Philip Hughes as part of B Company of the 34th Infantry Regiment. He participated in the battles at P’yongt’aek (Jul 6) and Ch’onan (Jul 7-8).  His company of about 140 men was at the forefront of the U.S. Army’s defensive perimeter north of Taejon when North Korean forces assaulted the position with tanks and overwhelming infantry during the pre-dawn hours of July 20.

Ralph Atherton, quoted in the Pittsburgh Post-Gazzette on June 25, 2000, was taken prisoner alongside Skero.  Atherton managed to survive the imprisonment that claimed so many others.  From Atherton's testimony, we learned that Skero, who stood 5-foot-7 and weighed 140 pounds, manned a machine gun to repel the North Koreans. When his position was overrun, he was shot five times in the back, then taken prisoner. Skero was one of about 32 men lost by the company in that action.

According to an article published February 28, 1993 by Associated Press journalist George Esper, Skero’s name was included on a list of 125 Korean War soldiers who were reportedly interrogated by Soviet intelligence officials based in North Korea.

Chuckie Skero was from Standard Shaft, Pennsylvania, a tightly-knit coal mining community of Catholic Poles and Slavs.  His hair was nearly white; everyone called him “Towhead.” A high school drop-out at 16, Chuckie’s mother signed for him to join the Army in 1946.  He was billeted with the occupation forces in Japan.  He enjoyed it enough to re-enlist in 1948. He sent his parents a photo of him and his Army buddies.  On the back he wrote “How do you like the shoeshine?”


After his capture, the Army provided scant news of his whereabouts.  Skero's family was notified by telegram on September 2, 1950, that he was missing in action.  After the cease-fire in 1953, released prisoners of war shared their knowledge.  Chuckie’s health declined over about 10 months of captivity in An-Dong, North Korea.  His weight fell to about 80 pounds.  He died of malnutrition on June 22, 1951. Fellow prisoner Christopher McAndrews recalled carrying Chuckie’s remains out of the prison compound at dusk.  Skero was buried in a shallow grave on a North Korean hillside.
Posted by Christopher Russell at 3:17 PM No comments: 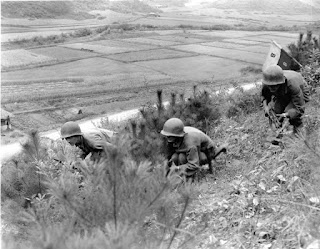 October 15, 1950. Korea. Troops of the U.S. 8th Cavalry Regiment on maneuvers.  The scrub pine seen on this hillside was typical of Korea's heavily de-forested countryside.  In many ways, Korea had yet to recuperate from a half century of Japanese domination.  Among the impositions placed by Japan on Korea was the extraction of raw materials which notably included lumber.  Philip Hughes and the other Americans rushed to Korea in 1950 enjoined the battle on landscape like this.
Posted by Christopher Russell at 5:18 PM No comments: