The Epic Journeys Of Philip Hughes 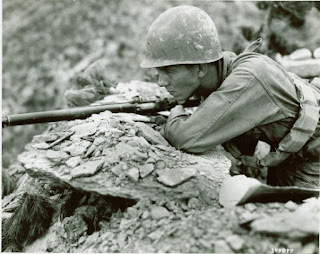 How does a seventeen-year-old kid, over the course of 14 months, go from a boarding school to the opening battles of the Korean War?  The Battle of Turkey Thicket is the new, fast-paced true story of a boy soldier from America's "Forgotten War." Philip Thomas Hughes was an orphan whose coming of age witnessed the civic evolution of Washington, D.C., a boarding school, a reform school, a stop-over in Chicago's Skid Row, and romance in post-War Japan.  Philip was one of the first, and youngest, soldiers committed to the Korean War.  His sacrifice provided unexpected yet life-long benefits to his kid brother.
Posted by Christopher Russell at 6:26 AM No comments: 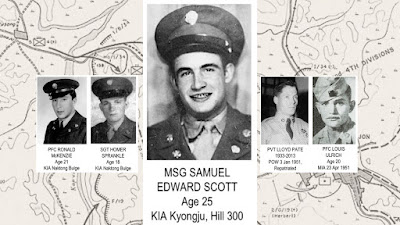 If ever there was a “typical” background for the first batch of young U.S. Army soldiers committed to Korea in July 1950, Master Sergeant Samuel Edward Scott fit that profile.  Known back home as “Sammie,” he was the fifth of six children born (as of 1930) to Sam and Emma Scott of Weakley County, Tennessee.  When little Sammie was born in 1924, his father, a farmer, was age 51. His mother was 36.  The Great Depression undoubtedly wore on the Scott family; both of Sammie’s parents were dead before 1950. Young Samuel Scott came of age just in time to enlist in the Army for service in World War II.  He earned a Purple Heart medal for wounds received in the European Theater of operations.
Scott was one of many enlisted reservists hurriedly recalled to active duty after the outbreak of war in Korea.  He returned at the rank of Master Sergeant with a military occupational specialty (MOS) of rifleman - exactly the sort of duty that was consuming lives faster than the Army could provide replacements.
There are no records indicating when MSG Scott arrived in Korea, but it must have been before September 1, 1950. He was one of the survivors of the 34th Infantry Regiment, which had been ruthlessly mauled during July and August.  Like PVT Philip Hughes, MSG Scott was relegated to King Company of the 19th Infantry Regiment after the 34th was disbanded on September 1.
Also like Philip Hughes, Samuel Scott would serve with the 19th only for a matter of days before his luck ran out.  On Saturday, September 9, 1950, MSG Scott was killed by North Korean forces encroaching on Hill 300, located on the western side of South Korea’s Hyongsan Valley, just north of Kyongju.
The Western Union telegram announcing his death was sent to his older sister.
Slowly, over time, photos of PVT Philip Hughes’s brothers-in-arms are showing up on line.  MSG Scott was my latest discovery.
Posted by Christopher Russell at 12:55 PM No comments: 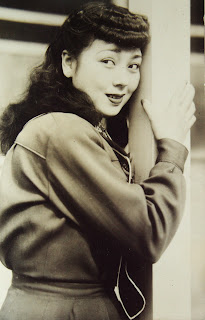 Identity of this young lady is unknown.
Photo courtesy of the Doug Price Flickr site.

June 1950. Seventeen-year-old Philip Hughes was in Japan long enough to find a girlfriend.  Not to take anything away from Philip, but that feat was not at all difficult for a U.S. soldier with a few bucks in his pocket during the spring of 1950.

"Babysan" was, in parlance peculiar to the Japan Occupation, the term of endearment for any young lady of real or potential romantic interest. An excerpt from The Battle of Turkey Thicket:

Her name – Mitsuko? Kyoko? Sachiko? – has long since been forgotten. She was young, certainly, but still perhaps a few years older than Philip. The Second World War left an indelible impact on her family. It might have been the loss of a brother. Her father. Their home. She was scarred by the past, burdened by the present, and unsure of her future. She was like many other young Japanese women who found themselves on the frontline of post-war reconstruction. Both she and Philip were motivated to connect for a mix of reasons. They shared a mutual need… for someone.
Posted by Christopher Russell at 7:46 PM 1 comment: 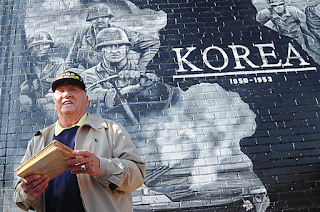 Louis Repko lives in Lorain, Ohio, just west of Cleveland on the banks of Lake Erie.  At the age of 85, Lou still gets out and about, though it’s not clear if he’s still making annual RV trips to Florida.  We do know that recently, on Veterans Day 2017, Lou was present and accounted for at the unveiling of a Korean War memorial mural in nearby Amherst, Ohio.  The image, painted by artist Mike Sekletar, is based on the Carl Mydans photo that originally appeared on the cover of Life Magazine’s July 31, 1950 edition. 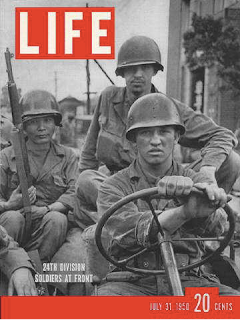 The original photo shows Private Lou Repko, then age 18, behind the wheel of a jeep in Korea, during the early days of the war.  With him are other members of the U.S. 34th Infantry Regiment’s ill-fated headquarters company. Their unit was destroyed when it bore the brunt of a North Korean attack on the 34th’s position above the Kapch’on River just north of Taejon during the pre-dawn hours of July 20, 1950. 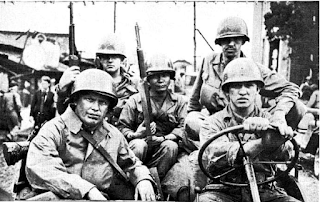 Lacking any documentation of the photo’s date, we know it was before the 20th, because Ken Edwards of Illinois, seated directly behind Lou, was killed on that day. Also in the jeep are Niles Cobles (center, missing in action July 20), and their sergeant, seated to Lou’s right (identity and status unknown).  The identity of the soldier behind the sergeant is unknown. Mr. Repko shipped out of Japan to Korea on July 2 along with Philip Hughes and 2,000 other members of the 34th Regiment. Like Philip, Lou was one of the 184 men of the 34th still standing on September 1, when the unit was disbanded and the survivors folded into other units. Whereas Philip Hughes met his fate in the shadow of Hill 300 on September 12, 1950, Lou survived and made it back home to Ohio. All of us wish him well.
Posted by Christopher Russell at 9:09 AM No comments: 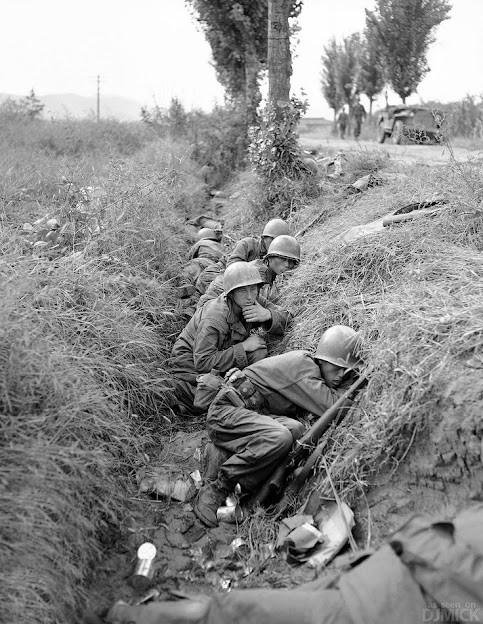 1950. Somewhere in South Korea. This is one of those images that raises more questions than it answers. We know that these are very young soldiers holding a roadside ditch. They've been there long enough to have broken into their C-rations, lunching under the lombardy poplars that line the road. Are they under enemy fire, or is this just an exercise? Is the photographer taking cover as well? In the background are a couple of figures - officers or non-coms - who stroll non-chalantly past a jeep. The faces of the kids in the foreground seem attentive, but not particularly alarmed. Who are they, and what happened to them?
Posted by Christopher Russell at 5:51 AM No comments: