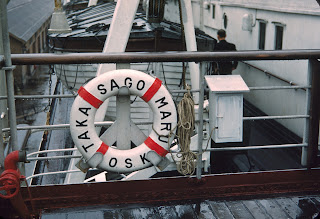 CAPTION:  1951. Sasebo, Japan. Deck-board view of the Takasago Maru,
which saw frequent use shuttling American men and materiel to and from
Pusan, South Korea.  Photo by Maj. Cecil B. White, courtesy of the Doug Price Flicker Site.

July 2, 1950.  Sasebo, Japan.  Seventeen-year-old Private Philip T. Hughes from Washington, D.C. was one of just under 2,000 men of the 34th Infantry Regiment who lined the dock in the pre-dawn hours.  He awaited his turn to file onto a narrow catwalk leading into the hold of a huge, white steamship.

The Takasago Maru was a Japanese-flag vessel, built originally as a passenger ship in 1937 by Mitsubishi Nagasaki for the Osaka Soshen Company.  The ship was drafted by the Imperial Japanese Navy in 1941, when it was promptly converted into a hospital ship - hence the white paint accented by huge red crosses on each side of her hull and on her two smoke stacks.  These markings provided the Takasago Maru some (but not total) respite from allied attacks during World War II. It was one of the few Japanese merchant vessels to survive the war.  After completing a series of post-war cruises to the Philippines, Indochina, and other ports to ferry Japanese combatants back home, the Takasago Maru was largely idle by 1950. 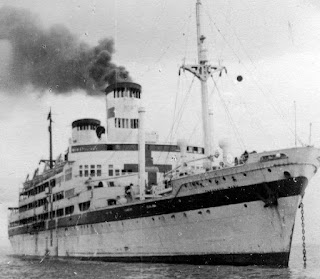 
The day before, on July 1, General Douglas MacArthur ordered the 34th to move to the Korean peninsula to "delay the advance" of North Korean forces moving south of the 38th parallel. Because no Military Sea Transport Service assets were available, Captain Raymond D. Hatfield, the 34th Regiment's S4 (logistics) officer, scrambled to lease the appropriate civilian shipping capacity.  The Takasago Maru would serve that purpose, moving the regiment's men and their personal gear.  Regimental vehicles - over 100 in number - would be shipped separately by LSTs.

Philip and his colleagues queued into the ship's confines, discovering cabins that had been stripped bare of their contents, except for marble floors that remained from the ship's early days as a true passenger liner.  Many men opted to encamp on the ship's wooden deck, anticipating a 15-hour passage from Sasebo to the Korean port of Pusan. Over half of these American soldiers were age 20 or younger.

The Land of the Morning Calm awaited them.  Some boys openly boasted that the North Koreans would turn and run once they saw American uniforms under a stars-and-stripes flag. Why wouldn't they?
Posted by Christopher Russell at 7:25 AM No comments: 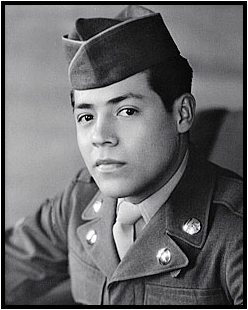 When Corporal Luis Patlan Torres and his 23rd Infantry Regiment arrived at the Port of Pusan on August 5, 1950, they were given instructions to be ready to move to the front with an hour’s notice. They had just spent the previous couple of weeks steaming across the Pacific direct to Pusan from Bremerton, Washington. There would be no time for sightseeing. But granted, Pusan at the time had little in the way of tourist attractions.

Torres, from Eagle Pass, Texas, would recognize his 20th birthday on August 25.  The next day, his regiment was deployed near the village of Changnyeong, in the Naktong River valley.  Now part of the Pusan Perimeter, the newly-arrived 23rd attempted install a defensive line. They were so few in number that a squad of 20-25 men had to cover a segment as long as seven football fields. On top of this, they were ordered to hold the line at all costs.

After midnight on September 1, about 15 to 20 thousand North Koreans crossed the Naktong opposite the 23rd’s thin defensive line. The regiment’s outposts were systematically overrun, as evidenced by a flurry of radio messages for help swamping the battalion switchboard. The flow of these signals decreased and finally stopped before daybreak.

The best evidence of Torres’ fate came from an American prisoner of war who after the cease-fire suggested that Cpl. Torres was captured and executed. His remains were exhumed in December 20, 1950, from a shallow grave near Changnyeong. At the time, the identity of these remains was unknown when they were interred at National Memorial Cemetery of the Pacific in Honolulu.

Fast forward to May 16, 2016, when the Defense POW/MIA Accounting Agency laboratory disinterred the remains to attempt definitive identification. By using Next Generation Sequencing techniques with mitochondrial DNA analysis, a positive genetic match was achieved on December 15, 2016 with samples provided by Torres’ brother, sister, and nephew.

Luis P. Torres was finally laid to rest on January 13, 2017 at the Fort Sam Houston Cemetery in Texas.
Posted by Christopher Russell at 2:04 PM No comments: 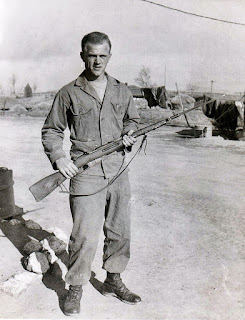 1953. South Korea.  Jim Scannell (1930-2016) of Baltimore, Maryland displays a Mosin-Nagant rifle that was almost certainly captured from Chinese communist forces.  Despite the Korean War's "limited" scope, it nonetheless employed weaponry from a wide range of sources.
Posted by Christopher Russell at 9:29 AM No comments: 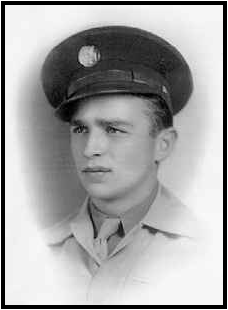 Staff Sergeant John St. Patrick Hughes, age 27, bid farewell to his wife and three little girls in Oregon when his regiment was the first to be transferred from the U.S. to join the “police action” in Korea.

A World War II veteran, Sgt. Hughes landed with the 38th Infantry Regiment at Pusan, South Korea. The date was August 19, 1950. He was about to participate in his second shooting war. By August 24, the 38th had advanced to relieve the shattered 19th Regiment. Their location on the Pusan Perimeter, west of Pusan, corresponded with that piece of real estate that would host the Second Battle of the Naktong Bulge. By the way, Sgt. Hughes was no relation to Philip Hughes, subject of “The Battle of Turkey Thicket.”

On September 6, Sgt. Hughes led a platoon tasked with planting land mines along a defensive perimeter.  For reasons we’ll never know, one of the mines that Hughes was handling exploded unexpectedly. He died later that day of his wounds. He had been in Korea for 18 days.


Today, his daughters cling to their random memories of a father who sang funny little ad-libbed songs and taught them to roller skate. John St. Patrick Hughes’s remains were returned home to Milton-Freewater, Oregon. They celebrate his birthday every year: March 17. St. Patrick’s Day.
Posted by Christopher Russell at 6:34 PM No comments: 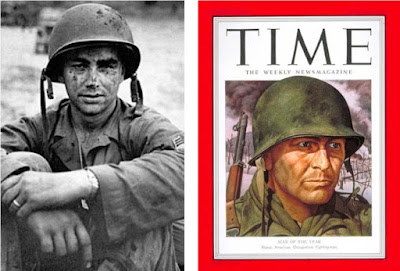 About July 8, 1950.  Vicinity of Ch’onan, Korea. Master Sergeant Jerry Curtis Christensen of Balaton, Minnesota has his photo taken by Life Magazine’s Carl Mydans. Christensen was age 25 at the time. He was previously employed in electrical equipment manufacturing before enlisting in the U.S. Army in 1946. At the start of the Korean War, Christensen was assigned to the headquarters company of Philip Hughes’s 34th Regiment. Christensen’s military occupation specialty was “infantry operations chief,” a title that applied to any number of administrative tasks supporting the battalion command post.

Mydans snapped this photo in the immediate aftermath of the 34th Regiment’s disastrous encounter with the North Korean People’s Army at Ch’onan during July 7-8. Elements of the 34th’s Third Battalion and Headquarters staff were cut off and surrounded. Only a few, including Christensen, managed to break out.  This photo subsequently appeared in the July 24, 1950 issue of Life Magazine. According to the caption, Christensen said “All I need is a bath.” Note the wedding ring on his left hand.

Jerry would survive 34th Regiment’s next two weeks leading up to the Battle of Taejon on July 20. He was one of the many U.S. soldiers unable to escape the enemy’s encirclement of Taejon.  Rounded up with other dazed survivors, he undertook a forced march to a North Korean prisoner of war camp at Hanjang-ni.  Jerry died there on December 10, 1950 due to some combination of illness, exposure, or wounds. His remains were never recovered.

Another blogger suggested that Jerry Curtis Christensen was the model for the January 1, 1951 cover of Time Magazine.  What do you think?
Posted by Christopher Russell at 6:37 PM No comments: