The Determination of Marguerite Higgins 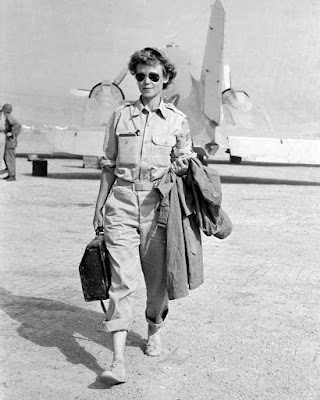 1950.  Korea.  Marguerite Higgins (1920-1966) did not fit the mold of a "war correspondent," that is, a non-combatant who covers war from the front line, armed with little more than a notebook and a pen.  But this is what Maggie did as she witnessed the first weeks of Korean War action on behalf of the New York Herald Tribune.  Hardly a novice, Maggie had already gained journalistic experience in Europe during World War II.  Still, she was petite, or dare I say it, "cute" - an attribute that almost precluded her access to the battlefield. Through sheer grit and determination, she was able to accompany the leading elements of the U.S. Army's 24th Infantry Division's initial foray into Korea.  She was in the vicinity of Pvt. Philip Hughes and the other wide-eyed American teenagers who encountered North Korean T-34 tanks for the first time near P'yongt'aek on July 6. Maggie suffered not only poor accommodations (fleas, lice and abysmal sanitation), but on a couple of occasions found herself under enemy fire.  Maggie Higgins recounted her Korean War experience in a book entitled "War in Korea: The Report of a Woman Combat Correspondent."
Posted by Christopher Russell at 6:29 PM No comments: 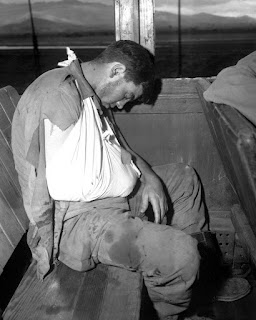 July 29, 1950.  On the ground in Korea since July 10, LTC John Michaelis's 27th Infantry Regiment (the "Wolfhounds) joined forces with Pvt. Philip Hughes's 24th Infantry Division to at least slow down the encroachment of the North Korean People's Army toward the port of Pusan.  Among the 27th's troops was PFC Orvin Morris, age 23, from Virginia. He was exhausted as much by his unit's constant redeployment  along the front lines as by the combat itself.  PFC Morris was photographed while riding a train back to an Eighth Army medical facility in Pusan to receive treatment for wounds caused by mortar fragments. Morris survived the war, but life was not easy for him.  He died in 1976 at the age of 49.  He's buried in Albemarle County's Free Union Church of the Brethern's cemetery.
Posted by Christopher Russell at 8:57 AM No comments: 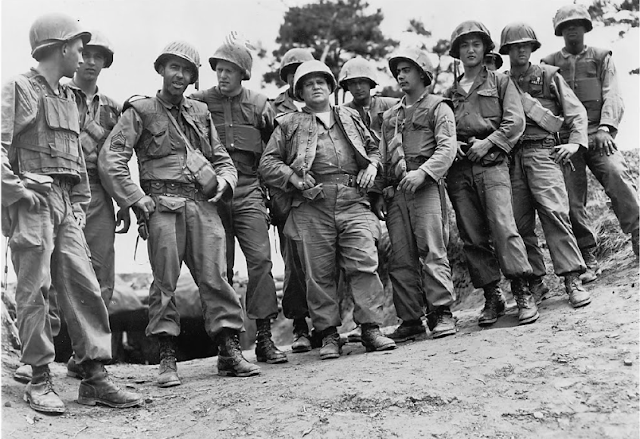 June 1953, near the 38th Parallel. The Korean War has just completed its third year. These men are both U.S. Army soldiers and actors.  They are the cast of the film "Cease Fire!" conceived by Owen Crump and produced by Hal Wallis (whose catalogue would eventually include Elvis films, of all things).

The premise of "Cease Fire" was as startling as it was unique:  to make a feature-length film about a war currently underway, filmed at the actual battle front of that war, using the real-life soldiers as actors.  On top of that, the film would employ the then-emerging concept of 3-D projection.

The plot was simple: It was during the waning days of the war when an armistice was anticipated by all parties.  A squad of men were assigned a patrol to secure a strategic portion of the front line from enemy encroachment.  Everyone anticipated returning home. Men from the U.S. 7th Infantry Division were tapped for the project.  Almost all portrayed characters using their real names.  While the acting is a bit wooden, and the voices over-dubbed in post-production, you still have to admire these men for the fact that battle scenes were filmed using live ammunition.

A couple of the men had flashes of acting talent.  One was Private Ricardo Carrasco of El Paso, Texas. His character was scripted to succumb to a mortal wound in one scene.  When the rushes (raw, unedited film) made their way back to Hollywood for review, the producers took notice of Carrasco, then age 19.  There was talk that this boy had "it." They spoke of a future film contract for him.

Fate intervened.  Filming wrapped up in late June, and many of the actors returned to combat before the end.  One of them was subsequently killed in combat on July 6, 1953. That was Ricardo Carrasco.

A fine backstory about the film's origin, production, and impact is found online.
Posted by Christopher Russell at 4:00 PM No comments:

The Chiggie and the "A" Frame

C. 1951. Vicinity of Pusan, South Korea. Do not underestimate this man. ﻿He is South Korean, ostensibly a civilian, and probably "friendly" to the American forces seeking to defend his country at the time from the invading North Korean Peoples Army.  Having said that, there's some chance that this man is an irregular insurgent, local by birth but clandestinely sympathetic to the NKPA. We have only conjecture to guide us.

He is too old to serve in the ROK (Republic of Korea) army.  But he is not too old to work. He wears an A-frame, an ingenious device that allows him to carry enormous loads on his back.  Given the economic disruption caused by the Korean War, his best opportunity to make a living is to offer his labor to American forces in exchange for food rations or, occasionally, a modest cash stipend.

American troops at the time, like Private Philip Hughes, affectionately referred to such laborers as "chiggies." If you measure work by units of effort per unit of caloric intake, this old man was by far more metabolically efficient than his American benefactors. This was most evident when he scaled - by foot - one of Korea's many hills, which the Americans were so often bound to do if they wished to hold ground.
Posted by Christopher Russell at 11:29 AM No comments: