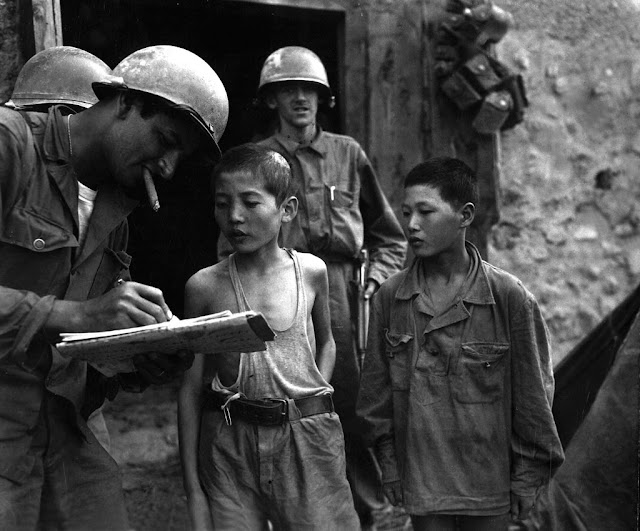 September 18, 1950.  Philip Hughes of B Company, 19th Infantry Regiment has been dead for six days, but the war in Korea continues.  It is far from over.  This date is three days after the Inchon Invasion, which dramatically reduced the enemy pressure on the Pusan Perimeter.  The beleaguered American and South Korean forces would not only hold, but retake South Korea.  North Korean forces were on the run.  Increasingly, Americans were encountering children among their enemy combatants. Poorly equipped and underfed, surrender was an attractive option for many, as it was for these two young "soldiers" undergoing interrogation.  What could they say?  They "fought" under duress for an army that would normally kill them for failing to advance and engage in battle.

These boys would be interned somewhere in South Korea until a large scale prisoner of war camp was opened on Koje-do Island in February 1951.  Had they survived the challenges of incarceration, they may have been among those released by South Korean President Syngman Rhee into South Korea in the spring of 1953.  Or they would may have returned to the North as so many others did, some willingly, some not so.  They would be nearly 80 years of age today.
Posted by Christopher Russell at 5:26 PM No comments: 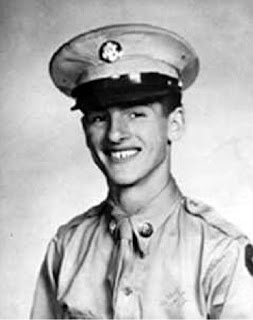 July 20, 1950.  Taejon-Kuchon, Korea.  Theodore Albert Brandow was barely 19 years old. He was only a couple weeks removed from garrison duty with the 34th Infantry Regiment in Sasebo, Japan.  This had been a cushy billet for Americans during the late 1940s, preceding the Korean War.

Ted Brandow hailed from the Catskills of up-state New York. He grew up during the Great Depression, with a father who spent his meager earnings on alcohol rather than feed his wife and six children. Ted joined the Army at the age of 17, attaining the rank of private first class while becoming a cook. Consequently, he was assigned to a headquarters company that assembled non-combatant radio operators, clerks, bandsmen, and cooks like Ted. Along with Philip Hughes and the rest of the 34th, PFC Ted Brandow was rushed to Korea on July 2, 1950, shortly after the outbreak of war there.

Along with Philip Hughes, Ted Brandow somehow survived the humiliating defeats that the 34th suffered in early July at P’yongt’aek, Ch’onan, and the retreat to the Kum River Line. Deployed on the eastern bank of the Kapch’on River, the 34th Regiment formed the first line of resistance protecting the U.S. Army’s Taejon headquarters.  The North Korean People’s Army bore down on this position with troop strength and weaponry far superior to the American commitment.

Lt. Col. Harold “Red” Ayres, commander of the 34th’s first battalion, knew the odds. Still, he was expected to hold the defensive line at all costs.  He formed a front line by placing two under-strength rifle companies (Alpha and Charlie) along the banks of the Kapch’on.  Behind this, he placed reinforcements.  Ayres’ command post was immediately behind the reinforcements. Theoretically, Ayres could order the reinforcements forward to plug any gaps suffered by the rifle companies. 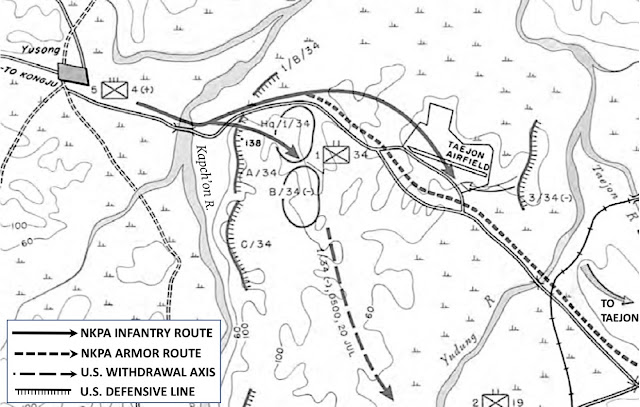 Who were the reinforcements?  Half of it was Philip Hughes’s rifle (Baker) company.  The balance were the men of the Headquarters company. These men traded their typewriters, trumpets, and soup ladles for carbines and Colt .45 pistols.

When the North Koreans approached the Americans’ position, their T-34 tanks and countless footsteps generated a cloud of dust that only thickened the humid night air. They overran the line companies and advanced directly toward Ayres’ command post.  In so doing, the North Koreans shoved Baker company aside.  As for the headquarters company, history reports that at least half were killed.  The rest were wounded, captured, or scattered to the surrounding hills. Ted Brandow was among those who didn't make it out alive.

Graves Registration recovered his remains several months later, and he was finally interred back home in New York. Ted's parents had split by this time, so when his $10,000 Army-issue life insurance policy was cashed, each parent received a check for $5,000.

Posted by Christopher Russell at 7:46 PM No comments: 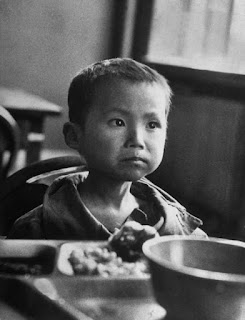 Spring 1951. South Korea. Mike Rougier of Life Magazine took this photo of five-year-old Kang Koo Ri. Kang was an orphan from a village some 15 miles north of Seoul. This village was located in the no-man's land between U.S. forces and elements of the Chinese People's Army, who were encroaching from the north. An American soldier from the 1st Cavalry Division found Kang huddled in the corner of his home, naked and alone except for the decomposing corpse of his mother, sprawled on a mat on the floor.  The soldier scooped up the little boy, and walked him back to the regimental aid station. Tears fell from his eyes as the boy stretched his arms back in the direction of his home.  He sobbed, but made no sound.

A chaplain cleaned up Kang and placed him in one of the many orphanages suddenly made necessary by the Korean War.

Life Magazine ran a few stories about Kang over the next decade - covering everything from his orphanage years to his adoption by a lady in California.  The last image of Kang is as a teenager - an American teen, that is. There's no more after that.  He has since passed into anonymity.  Kang would be over 70 years old now.
Posted by Christopher Russell at 6:32 PM No comments: 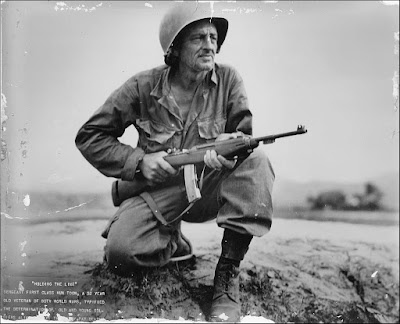 UPDATE 23 OCT 2018:
A few misplaced letters of the alphabet make a huge difference.  The Internet makes multiple reference to "SFC Hun Toon of Vermont." That appellation is apparent in a clerical error in the caption applied to the lower left of the image shown above.  No wonder I could not find a trace of him in the U.S. Censuses from 1900 to 1940.  Thanks to Robert C. Mackowiak, we have a proper accounting of Master Sergeant Orlando Huntoon (1898-1972), who rests in the U.S. Soldiers' and Airmen's Home Cemetery in Washington, D.C. Okay, he was age 51 in this image, but still, that's a rather advanced age for a foot soldier.  Check out the Mackowiak link for more of MSgt. Huntoon's story. 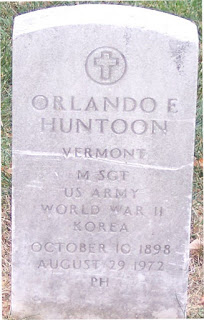 ORIGINAL POST:
The Truman Library digital archive includes this image  (Accession Number: 2007-713) of Sergeant First Class Hun Toon, age 52, from Vermont. Taken in July 1950, the image shows SFC Toon, with carbine in hand, deployed to Korea with the 24th Infantry Division for his third war. You see, SFC Toon had already earned service ribbons for participation in World Wars I and II. I have yet to see any other statistical vestige of Hun Toon's existence - not in the U.S. Censuses from 1900 to 1940 or in the Korean War Casualty Database. Nothing. My guess is that "Hun Toon" is a derivative of a more formal given appellation. It's up to our collective imagination to picture SFC Toon leading a squad of teenage boys over hills and through rice paddies during the early battles of the Korean War.
Posted by Christopher Russell at 6:34 AM No comments: