October 1950. Suwon, Korea.  Here, in all its shabby-chic glory, is a U.S. Air Force North American F-51D Mustang. It is returning from a sortie during which the pilot apparently found no targets worthy of the HVAR rockets affixed to the underside of the plane's wings. The pilot taxis his aircraft, serial number 474385, across a rutted, unimproved field lined by make-shift tent facilities. The aircraft itself shows evidence of replacement parts and some rough handling.


The Mustang was arguably the paragon of piston-engine fighter planes.  Designed and built for World War II, the Mustang excelled in air-to-air combat over Europe and the Pacific.  By 1950, however, new jet technologies yielded fighters with performance that eclipsed the prop-driven Mustangs.  The USAF began to systematically cast off its once-numerous fleet of Mustangs; some were exported to foreign air forces while others eased into retirement by serving with Air National Guard units. Just as many went to the scrap heap.

With the outbreak of war in Korea, the U.S. Far East Air Force (USFEAF), based in Japan, was in the midst of its transition from prop- to jet-powered fighters.  Consequently, the command lacked sufficient numbers of either type.  Within days, it was clear to U.S. military planners that an infusion of air power would be critical to thwarting the North Korean invasion. About 30 Mustang air frames awaited scrapping in Tachikawa, Japan; these would enjoy a reprieve. The existing cadre of USFEAF fighter pilots easily retrograded from their jet-powered F-80 Shooting Stars to the trusty Mustang.


As the magnitude of the Korean conflict grew during July, the need for additional Mustangs was evident. An order from USAF headquarters initiated the recall of Mustangs from state-controlled Air Guard units.  This requisition had unfortunate consequences.  Military culture is such that when a unit is ordered to relinquish a portion of its assets - be it materiel or personnel - that unit will likely select the dregs of its inventory.  The USAF subsequently gathered a fleet of 145 Mustangs for shipment to Korea in July 1950, a move which allowed Air Guard units to part with many of their maintenance headaches.


Thus was the lot drawn by USFEAF pilots winging over Korea in the Mustang.  The sleek fighter was beloved by many pilots for its handling and performance, but age was taking its toll. No Mustang airframe was less than five years old (geriatric in the era of rapid aviation technology change). If it was stored in Japan, the Mustang's liquid-cooled Merlin engine typically suffered from deteriorated fuel hoses and couplings.  Failure of these components brought a number of pilots and their planes to grief.  When employing an Air Guard cast-off, the pilot risked lapses in reliability that were extremely inconvenient when navigating over and around Korea's mountainous terrain.  And all of this was aside from the enemy's voluminous anti-aircraft fire.

Although tired, the Mustangs delivered bombs, rockets, napalm, and machine gun fire against enemy targets. Pvt. Philip Hughes and the other ground soldiers in Korea cheered all the air support they could get as they faced a numerically superior enemy.  The venerable Mustang could not fight the war single-handedly, but it probably played an instrumental role in preventing the collapse of the United Nations' defense of South Korea during the summer of 1950.
Posted by Christopher Russell at 11:52 AM No comments: 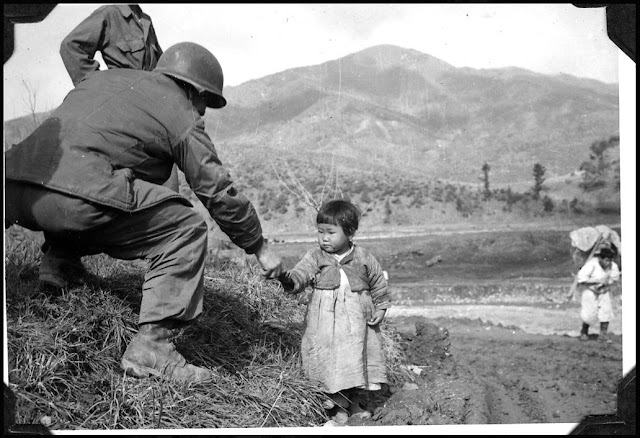 c1950. Korea. Refugees are on the move over an unimproved road that has already been reduced to muddy ruts by military traffic. A G.I. shares a treat from his ration box: a Jim Dandee cookie? A Brachs candy? Or a stick of gum?  That it came from a five-year-old ration box didn't matter to this little girl.

The young man to the right rear is an enigma.  Ostensibly a civilian, he bears a load on the A-frame perched on his back. He is old enough to be a soldier. Why has he not joined ranks with the Republic of Korea army to defend his country?  Is he travelling covertly as a scout for the North Korean Peoples Army, or as a guerilla sympathetic to those forces? If so, he was hardly unique.

Even this brutal war allowed humanity to display brief moments of kindness. The identities and fates of these individuals are unknown. We can only hope they forged memories durable enough to detract from the hardships that each would endure.
Posted by Christopher Russell at 9:22 AM No comments: 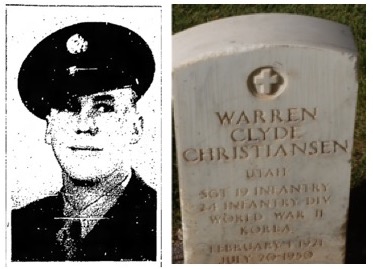 Trout Creek boasts the smallest secondary school district in the state of Utah.  It's nestled in arid farm country in the far, far west portion of the state, just a stone's throw from the Nevada state line. When compiling data for the 1940 population census, the census-taker's last stop in this remote district was the farm of Fred Christiansen and his wife Clara. The census shows two sons in the household at the time: John and Frank.

There was a third son, Warren, age 19 in 1940, who had already departed the farm after attaining an eighth-grade education. Warren was by then billeted at Fort Winfred Scott, the beautiful headquarters for the artillery defense of San Francisco and its adjacent coastline.

Warren would serve in the Army throughout World War II.  He got married during the war prior to his being shipped overseas. His combat resume included a Bronze Star for his participation in the retaking of Bougainille from the Japanese in the Solomon Islands. Meanwhile, his wife bore him a first daughter in 1943, and a second after the war in 1946.

Warren stayed in the Army after World War II.  When the Korean War began, he was a sergeant, rushed to Korea along with other American troops stationed in occupied Japan. Less than three weeks into the war, on July 20, Warren stood with Pvt. Philip Hughes and the rest of the already depleted B Company, 34th Infantry Regiment. There, on the slopes above the Kapch'on River, they formed a defensive line against the North Korean Army's advance. In the pre-dawn rain of July 20, Warren Christiansen's squad of riflemen attempted to hold off enemy troops in numbers far superior to their own, advancing uphill from the darkness below. The position of B Company was summarily overrun, as the Americans were scattered, killed or captured. Their retreat was too disorganized to allow for an accounting of dead and wounded. Many, like Warren, would be listed as missing in action. But there was apparently an officer with presence of mind to record heroic deeds of the some of soldiers under his command. Citations included a second Bronze Star for Christiansen.

In late 1950, American forces regained the territory surrendered during the early days of the war.  Graves Registrations units performed the gruesome task of recovering remains of troops lost during the summer 1950. Some remained where they fell, while others were hastily buried by the few civilians who had remained in the area through the see-saw battles. The bulk of the recovery would take months. Warren Christiansen would not be officially accounted for until October 1951. Additional finds would continue in decreasing numbers for many years to come, as the once-open countryside of Warren's last battle was methodically developed with new construction fueled by South Korea's booming economy.

While he was still listed as missing in action, Warren Christiansen's second Bronze Star was presented to his five-year-old daughter Mary Ellen during an April 1951 ceremony at Fort Douglas, Utah.
Posted by Christopher Russell at 5:42 AM No comments: 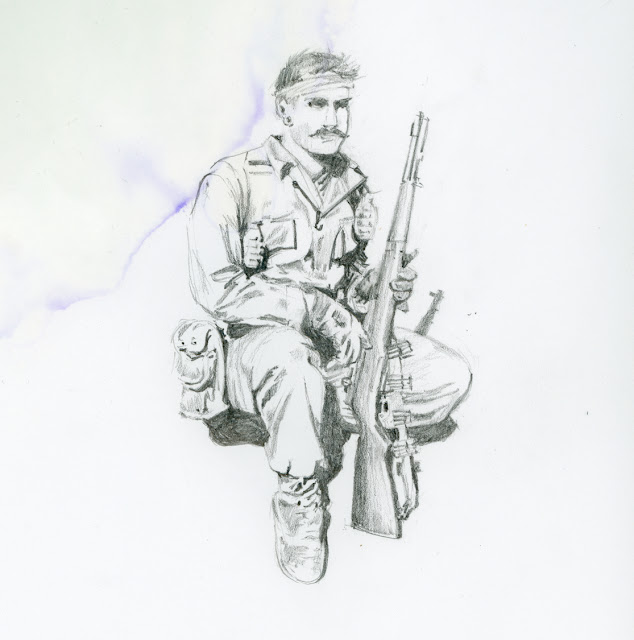 
This is my sketch of Clarence “Gypsy” Martin. I have not seen a photograph of him, so artistic license was exercised here. He was a singular character among the 34,000 or so men who died in Korea. Born “somewhere out west” in 1922, he was at times soft-spoken and bookish, the sort who enjoyed throwing big words into conversations.  Martin served in World War II, where he was badly injured as he manned a machine gun. His valor was witnessed by the famed war correspondent Ernie Pyle, who lobbied unsuccessfully to have Martin awarded the Congressional Medal of Honor. Martin was, however, successful in getting a metal plate fitted to replace the portion of his skull that was creased by a bullet.

After his World War II discharge, he was at a bit of a loss.  He lifted weights and enjoyed playing baseball. He regularly went to church. Still, he was restless, and after a few months, he re-enlisted in the Army. He met his wife Myrle in 1948, with whom he settled in Harrisburg, Pennsylvania. A year later, she bore him a son. Myrle taught him to crochet, and he proceeded to create afghans, doilies, and tablecloths.

By 1950 he was a Master Sergeant, and by 1951 in Korea, with the 21st Infantry Regiment. He led a rifle platoon.  He cut quite a figure on the battlefields of Korea. Swarthy complexioned and medium height, he wore a handlebar mustache, the tips of which he kept meticulously waxed.  He eschewed a helmet because of the plate in his skull. He wore his hair long, slicked back in a pompadour. To this he added a bandana and a pair of earrings, courtesy of Myrle. For laughs, we may suppose, he affixed little bells to his combat boots. Clarence Martin would be called “Gypsy” by the men under his command. Combat brought out Martin’s aggression as well as his booming voice. “C’mon you SOBs, let’s get going!”

On April 25, 1951, at about 1:00 in the morning, Gypsy Martin and his platoon were near Chipo-ri North Korea, where they faced off on a hilltop against a swarm of Chinese infantry. Their position was overrun, with Martin being injured twice in the process. He ordered a retreat, but manned a machine gun to cover the platoon’s withdrawal. It was reported that before the machine gun ran out of ammunition, he killed between 50 and 80 Chinese. But before the platoon could fully withdraw, the Chinese deployed their own machine gun. Wounded and bleeding, Martin charged the enemy positions with a carbine. He fell, wounded again. The Americans watched as Gyspy Martin rose to his feet and walked – WALKED – into the ranks of Chinese. He grasped his carbine by the barrel, using it to club away at enemy soldiers.

The Americans re-took the position the next day.  There, they found Martin’s remains on the hill, accompanied by a number of Chinese around him. For months after the clash at Chipo-ri, Gypsy Martin’s colleagues told stories about him as they gathered around their campfires.

He was finally interred in Arlington National Cemetery.

Posted by Christopher Russell at 8:47 PM No comments: