Man at Work in War 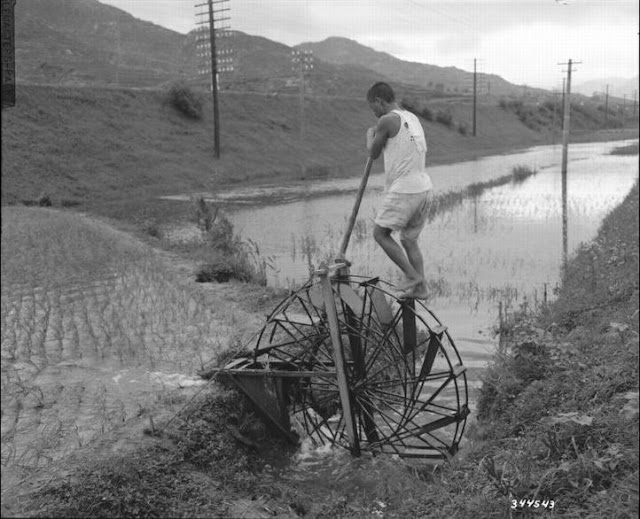 27 July 1950. As war engulfed the Korean peninsula, life nevertheless carried on for beleagured citizens.  People have to eat, right?  Here, a man employs an ingenious water pump to irrigate a rice paddy.  His identity, fate, and politics are unknown.
Posted by Christopher Russell at 7:30 PM No comments: 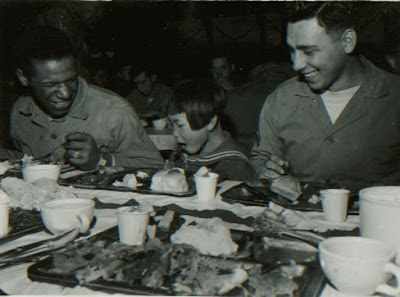 Christmas 1952. Forward air base of the First Marine Air Wing, Korea.  The war in Korea orphaned an awful lot of children.  The Americans helped these kids when they could, if only to share food and provisions.  Here, Marine Corporals Benton Cook, Jr. of Chicago and Mariano Angotti of Des Plaines, Illinois break bread with one of those orphans.  She seems to approve of the Marines' chow.
Posted by Christopher Russell at 7:38 PM No comments:

The Selfless Trek of Dowell B. Hudson

July 26, 1951.  This is 1LT Dowell B. Hudson of Abbeville, Louisiana.  He was age 27 at the time of this picture.  LT Hudson, a member of C Company, 38th Infanry Regiment, was already a veteran of World War II, having enlisted in January 1943.  He is seen resting here in Korea during his trek from Hill 1171 to a medical aid station in the rear.  By this point, Hudson had already walked for six hours with a leg wound. Accepting only the help of a crude walking stick, Hudson refused a stretcher because "others need it worse than I." This injury would incapacitate him until September 3, 1951. He returned to combat only to be wounded again on October 13. He would be hospitalized in Japan again until November 24. He celebrated his 28th birthday during that second convelescence.

Dowell Hudson survived Korea.  He finished his Army career as a Lietenant Colonel. He retired to Abbeville, Lousiana, where he attended St. Theresa Catholic Church.  He died in 2006 and was buried at St. Paul Cemetery.  His wife Irene was interred beside him in 2011.
Posted by Christopher Russell at 9:39 AM No comments:

Will YOU Remember Don Webb?

The following was distilled from the 2004 memoir of James Henry Christiansen, as presented on koreanwar.org. The source material is a frank, candid, and extremely well-written reflection of a young American man's life before, during, and after the Korean War.

Don Webb and Jim Christiansen were best friends from Atlanta, Georgia. The two boys, both tall and lanky, bore a strong resemblence to each other. They would often take advantage of this fact to cause mischief. Don was amiable, friendly, and outgoing. He played tennis and trombone. His girlfriend was the granddaughter of baseball player Rogers Hornsby.

Don and Jim exited high school in 1948. A quick survey of their employment prospects convinced them that military service was the best option. Don expressed initial interest in the navy, but ended up joining the army per Jim's insistance.

The boys joined a cohort of enlistees who embarked from Atlanta to Fort Jackson, South Carolina for basic training. Vocational training followed. Don and Jim opted for radio school at Camp Gordon. There, they learned to type, to send and transmit via Morse Code, and to operate SCR-399 radio. This massive, truck-bound appliance was powered by a 10kW generator towed on a trailer behind it. Radio school training was self-paced; you graduated when you mastered it. Jim Christiansen finished the curriculum in six months. He would part ways with Don Webb, who required another eleven weeks of training before finally attaining the military operations specialty (MOS) code 5740, "radio operator, intermediate speed."  Jim would later surmise that those ten weeks cost Don Webb his life.

Jim Christiansen as assigned to a signal battalion in Japan. He arrived in the late summer of 1949, when the U.S. Army's post-war occupation was in full swing. Don Webb would later arrive in Japan to an assignment with the 16th Recon Company of the 1st Cavalry Division. While Jim and Don failed to meet up in Japan, they kept track of each other's whereabouts. Each boy - they were 19 years old - developed his own circle of friends, including civilian female companionship.

Then came June 25, 1950 and a brand new war in Korea. The U.S. Army's haphazard and piecemeal deployment placed Don in Korea in July, more than a month before Jim Christiansen's arrival. The exigencies of combat in 1950 forced many rear eschelon troops - including radiomen like Don Webb - to pick up a rifle and function as infantrymen.

On September 7, 1950, Jim wrangled a pass from his post to visit Don. Jim hitched a ride on a chow truck to Don's position on the Naktong River. This was the front line; North Koreans were on the opposite river bank. All the fighting took place at night. Jim was there long enough to learn first hand from Don and his colleagues that the war was not going well for the Americans. But Don was committed to his job; he was getting paid to fight. Jim's brief visit ended when he departed with the chow truck upon its return to the rear. He vowed to return again three days later, on the 10th.

Frederick Chorney served alongside Don Webb. In his own recollection posted in 2009, Mr. Chorney recalled his friend Don. On September 10, they were part of a movement to take a hill. Advancing under fire, Don and Fred took momentary refuge behind a rock. They paused long enough to simply look at each other while each caught his breath. Don was the first to move on to continue the climb. That was the last that Fred Chorney saw of him.

Jim Christiansen returned to Don's unit as promised on September 10. The men dodged Jim's queries as to Don's whereabouts. No one wanted to tell Jim that his friend was killed in action only a few hours before. Over the decades that followed, Jim had recurring dreams of running into Don to find out that he wasn't killed after all. Over time, as Jim aged to 30, 40, 50 years and more, the Don Webb encountered in his dreams was still a teenager.

Don Webb was buried in Atlanta exactly one year after he was killed in action.
Posted by Christopher Russell at 6:41 AM No comments: