Early 1951. Pusan, Korea. Despite the sign affixed to the building that says "NO PHOTOGRAPHING," Maj. C.B. White of the 15th Field Artillery, U.S. Army 2nd Division, captured this dock-side image of a brass ensemble in 1951 as he departed Korea for Japan. A steady rain was underway at the time. The Eighth Army usually provided modest fanfare to send each batch of troops on their way to and from Korea. While the photo resolution is sketchy, it may be evidence of personnel integration at a time when the Army was still playing catch-up to Truman's Executive Order 9981.

Pvt. Philip Hughes was one of the first (and youngest) U.S. Army soldiers to depart to Korea at the beginning of the conflict. He entered Korea via this same port on July 3, 1950. His remains came back from Korea in 1951 as he was subsequently prepared for final interment in Arlington National Cemetery, just a few miles from his boyhood home in Washington, D.C.
Posted by Christopher Russell at 6:37 AM No comments:

The Identification of Leo Duquette

From this festive photo, fast-forward to October 1950.  As U.S. forces push northward to recapture territory lost during the opening weeks of the Korean War, graves registration teams revisit those battle sites in search of remains.  Many sites hosted multiple sets of remains, sometimes buried, and sometimes not.  Identification of individuals was not always possible.

Search teams active to the south of Chonui found pretty much what they expected.  On July 11, 1950, the 21st Infantry Regiment's third battalion was ordered to stand fast on a ridge line that straddled the road south to Choch'iwon. It was there in October that graves registration found the remains of 164 Americans.  Time and the elements compromised much of the material that would aid in identification.  Persons who could not be identified with technologies prevailing at that time were assigned an inventory number.  Among these was X-132, who was buried as an unknown at the National Cemetery of the Pacific, better known to some as "The Punchbowl."  Officially, Leo would remain "missing in action."

Fast forward again 67 years, almost to the day.  The Defense POW/MIA Accounting Agency is working round-the-clock to examine disinterred remains of U.S. servicemen retrieved from the battlefields of World War II, Korea, and Vietnam.  On October 16, 2017, the DPAA completed its DNA analysis to determine that X-132 was PFC Leo Duquette of L Company, 21st I/R.  Like PVT Philip Thomas Hughes, Leo enlisted in the Army as a 17-year-old kid. In July 1950, at age 19, Leo and much of his battalion were surrounded by superior numbers of North Korean forces. Few of the Americans made it out alive. Leo was the son of Lucien, a carpenter, and his wife Corrine.  Both parents have long since passed away without knowing the fate of their son.

Leo is survived by some younger siblings. In November 2018, Leo's siblings received his remains for interment in northwest Ohio.
Posted by Christopher Russell at 5:34 PM No comments: 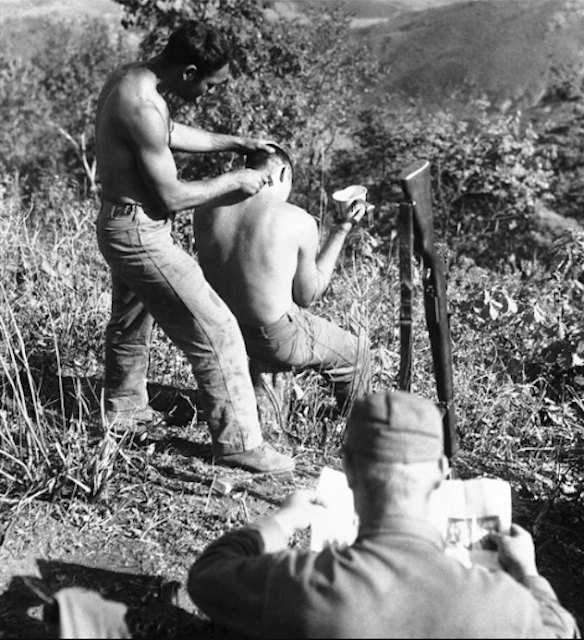 c. 1950. Korea.  These Marines hold a hard-won hilltop position. They "enjoy" field accommodations very similar to those endured by PVT Philip Hughes and his U.S. Army colleagues. Here, we see PFC Richard West of South Dakota getting a haircut. He holds a mess kit water cup filled with shaving mud.  PFC John Clements of Texas is the barber. PFC Robert Green of Oregon waits his turn, passing the time with an old magazine.

Posted by Christopher Russell at 8:07 PM No comments: 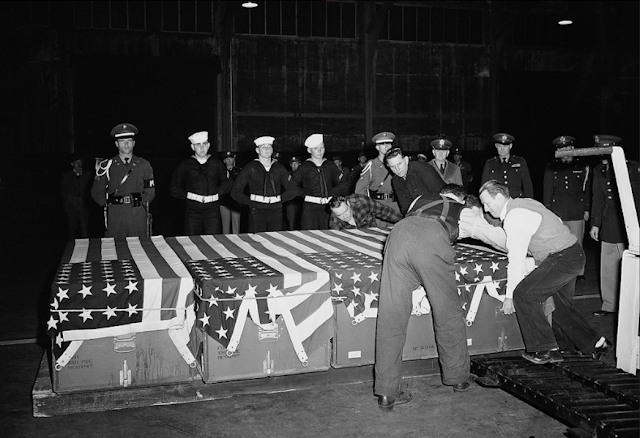 March 21, 1951.  San Francisco, California.  Cargo from the USS General Randall carries the remains of personnel killed in the Korean War.  These were the first of over 34,000 remains to be repatriated. For the first time in the history of American warfare, the policy of repatriation was implemented to the greatest extent practicable. The U.S. Army established a mortuary affairs facility at Kokura, Japan, where a Coca-Cola plant was converted to an assembly line for the processing of remains.  These tasks involved the proper identification of individuals, embalming the remains, and disposition of personal effects.  All of this took time, so many of the remains were interred in temporary graves while they awaited processing.

Pvt. Philip Hughes, killed in action on September 12, 1950, began his last journey in late 1951.  Philip was shipped in a flag-draped casket held in a rugged shipping container like those shown here. His container was transshipped to a rail car that carried him to the Defense Department's east coast mortuary hub in New York.  The last leg of his journey took him by rail to Washington, D.C, and ultimately, Arlington National Cemetery, where his final interment took place on February 27, 1952.
Posted by Christopher Russell at 5:17 PM No comments: