1950. This nasty little war in Korea caught the U.S. Army unprepared to mobilize its assets according to traditional doctrine. The Army was only two years past the issuance of President Truman's Executive Order 9981, which essentially declared that all branches of the military should dismantle the human resource provisions that separated personnel roles and accommodations on the basis of race. The language of the E.O. provided a bit of wiggle room:

"This policy shall be put into effect as rapidly as possible, having due regard to the time required to effectuate any necessary changes without impairing efficiency or morale."

The issuance of an executive order does not constitute compliance. The Army, as evidenced by collective action across its command structure, made it a point to largely disregard Truman's order. For this reason, the first U.S. troops deployed in Korea were drawn from occupation forces in Japan that thoroughly segregated black (negro) troops from all others.  Segregation was achieved up thorough and including entire regimental structures.

The exigencies of war in Korea would soon challenge this century-old military custom. Here's how it worked, if you allow the following as a realistic hypothetical.

August 1950:  Combat troops of the U.S. Eighth Army have been pushed down the Korean peninsula into the redoubt known as the Pusan Perimeter.  General Walton Walker lacks sufficient manpower to form a strong, continuous line of defense.  He enjoys limited mobility in the form of trucks that can relay troops from one position to another as needed to repel North Korean forces, which have not only superior numbers, but also the initiative as to when and where they wish to attack the perimeter. In other words, Walker's defense was a shell game that required him to move units quickly in order to achieve success.  Among the units holding the perimeter at this time was the all-black 24th Infantry Regiment.

Understand that U.S. combat losses at this time were formidable, with attrition being accounted for by rounding up replacements drawn from non-combat roles in Japan. These clerks, mechanics, military police, intelligence analysts, and others were rushed to Korea by the ship and plane load. Efficiency demands that these vehicles attain a high load factor - why dispatch a 100-seat airplane with only three passengers?  One segregational barrier falls with respect to troop transport to Korea.

Now comes the crucial step.  Replacement troops arrive at a depot in Pusan. They await truck transport to the appropriate units.  Recall that transport capacity is limited; the Eighth Army of 1950 was wholly reliant on equipment left over from World War II.  Trucks are often unreliable.  The replacement depot's personnel officer has a dilemma: he has 100 replacements, 12 of whom are black. The 19th Regiment needs 100 replacements immediately.  The truck capacity for 100 men is available now, but not for long, as some trucks will be dispatched for other tasks.  The officer is forced (gasp!) to fulfil the demand for 100 men by including 12 blacks on the roster.

And it was in this fashion that the U.S. Army made its first meaningful strides toward the integration of its personnel, allowing men of all races to bear arms side-by-side as they fought and died in the "police action" in Korea.
Posted by Christopher Russell at 4:07 AM No comments: 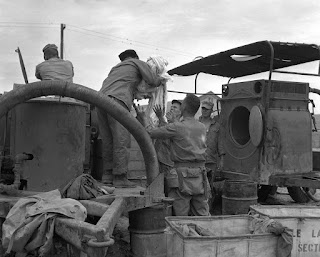 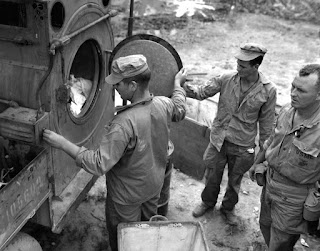 1950.  Korea. These Marines in Korea are performing laundry chores in the field. The U.S.  Army had similar equipment.  In both cases, these services provided some measure of relief to countless combat troops.

The machinery was truck-mounted, while water supplies were drawn from whatever natural source was convenient.
Posted by Christopher Russell at 7:21 PM No comments: 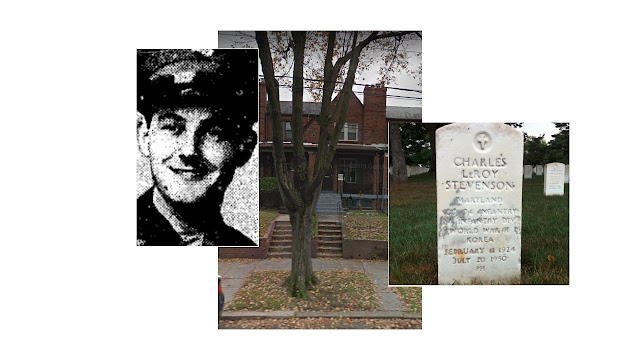 Charles E. Stevenson survived World War I trench warfare in France. He was not unscathed, however.  He was subjected to a gas attack that caused chronic respiratory damage. During the next twelve years of his life, he managed to return home to Washington, DC where he got married and settled down with his wife Marie. They would have two sons: William, born in 1923, and Charles Leroy, born the next year. Still, the elder Charles' ailment became fatal in 1930. He was laid to rest in Arlington National Cemetery. Widow Marie subsequently welcomed her mother into her home at 224 Emerson Street, N.W. Washington; the mother would help with the boys as they grew up in this quiet residential neighborhood.

Charles, Jr. graduated from high school in 1942, just as World War II was ramping up. As so many other young men did, Charles joined the U.S. Army.  He wound up in Europe, participating in the late battles of Spring 1945, just prior to Germany's surrender. Immediately after the end of European hostilities, his division was sent to the Philippines in anticipation of further battles that were rendered unnecessary by Japan's capitulation.  Charles came home and enrolled in George Washington University.

College pursuits apparently did not satisfy Charles' needs.  During the late 1940s, he would re-enlist for a second hitch in the Army. He may have been motivated by a sense of duty to his father.  Preparing to ship out once more for overseas duty, Charles assured his mother that nothing would happen, as the war was over.  But should he somehow come to grief, Charles added, he asked his mother that ensure that he be buried near his father at Arlington. Charles then went to Tokyo, where he joined the U.S. occupation forces.  He worked in the intelligence section of General Douglas MacArthur's headquarters, located  in Tokyo's Dai-ichi Life Insurance building.

This was Charles Leroy Stevenon's situation when the Korean War began on June 25, 1950.  Within days, U.S. Eighth Army troops began shipping out of Japan and over to Korea. These Americans fared so poorly against North Korean forces that the Army began to replenish its combat losses with replacements rounded up from various rear echelon duties. As each July day passed by, the Army would convert more of these apprehensive clerks, cooks, mechanics and other specialists into riflemen and rush them over to Korea.  Finally, on July 13, Charles wrote to his mother that he too had been reassigned to Korea.

Charles undoubtedly found the transition difficult.  Now carrying the rank of sergeant and taken away from his desk job, Charles was expected to become a squad leader in the 34th Infantry Regiment, located then along the front lines just above Taejon. Charles had only hours to re-acquaint himself with weapons while getting to know the men under his command. Among the existing ranks of the 34th was PVT Philip Hughes, also of Washington, DC.  We have no way of knowing if the two ever met while in Korea.

The advancing North Koreans bettered the Americans in numbers, weaponry, and determination.  A disastrous pre-dawn clash along the Kapch'on River on July 20, followed by the subsequent fall of Taejon, sent the U.S. Army into an embarrassing rout.  Philip Hughes was counted among the survivors of this particular engagement; Charles Stevenson was not. Only in November of 1950 did Marie Stevenson in Washington, DC learn that her son was missing in action.

Marie and her mother were already making volunteer service visits to Washington's Walter Reed Army Hospital, which was bustling now with wounded troops from Korea. She remained hopeful. After all, the Inchon invasion on September 15, 1950 effectively reversed the fortunes of American and allied forces in Korea. News of U.S. Army advances may have eased her worries about her missing son. With the Christmas holiday approaching, Marie purchased an automobile to present to Charles upon his return. She had it parked in front of her home on Emerson Street.

Marie's good intentions were not rewarded.  The remains of Charles Leroy Stevenson were found in December of 1950 where he fell the previous July along with many other Americans lost in the defense of Taejon.  The Army's mortuary affairs eventually returned SGT Stevenson to Washington, where he was laid to rest in Arlington, just across the lane from his father. Marie joined them in 1985.  PVT Philip Hughes went on to fight in other engagements before his luck ran out in September 1950.  He too is buried at Arlington.

Posted by Christopher Russell at 8:01 PM No comments:

On the Job Training 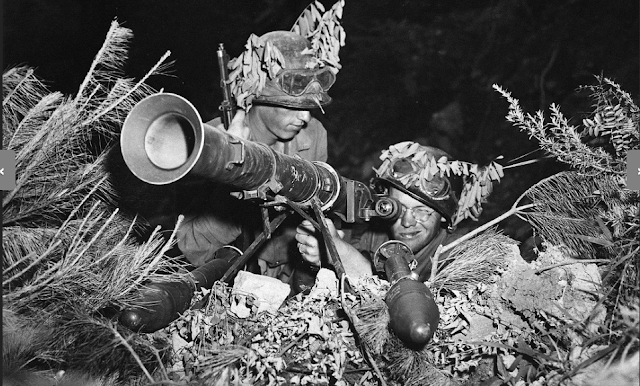 July 24, 1950. Korea. Two U.S. Army soldiers deploy a new 3.5-inch "super bazooka," rushed to Korea only days before.  One of the first crew-served weapons actually capable of stopping a North Korean T-34 tank, the super bazooka was intended to replace the ineffective 2.36-inch version that was deployed during the opening days of the Korean War. The 3.5-inch model fired a round that was capable of penetrating up to eleven inches of armor even when fired from a range of up to 900 yards. Crews had to familiarize themselves with this weapon under battlefield conditions.
Posted by Christopher Russell at 2:51 AM No comments:

June 24, 1951 was a gorgeous day in Korea.  It was on this day that an A.P. photographer captured this image of a U.S. soldier's temporary grave.  He was interred by his colleagues pretty much where he fell.  Per standard operating procedure, the spot is marked with the soldier's bayonet-equipped M1 rifle.  There are also two entrenching tools similarly dug in, one with his helmet and the other with his cartridge belt. In a matter of hours, the Army's Graves Registration team would disinter the remains and - over the course of a few weeks - forward them through mortuary affairs based in Japan.  Only after proper identification and embalming would the remains be shipped home for final interment.
Posted by Christopher Russell at 7:01 PM No comments: