Mid July 1950.  These are a sampling of 1st Cavalry Division men aboard an LST bound for Korea.  These men will land unopposed on July 18 on the beach at Pohang-dong on South Korea's east coast.  As this picture was taken, they knew little about the war except that it was only about 20 days old and it was not going well at all.  They gather at the railing, pondering the sudden end of their easy occupation duties as they watch the methodical retrieval of mooring lines on the dock below.  The 1st Cav would soon take its place on the Pusan Perimeter, bolstering the tattered remnants of the 24th Infantry Division that preceded them into combat. These were "cavalrymen" in name only; they functioned like any other infantry division, proceeding to war either on foot or courtesy of a GMC "deuce-and-a-half" truck.
Posted by Christopher Russell at 12:00 PM No comments:

C. 1950-51.  In a strategic sense, the rail yard in Pusan was the most valuable real estate in South Korea during the Korean War.  At the time, the nation's road network was insufficient to support the volume and variety of heavy traffic needed to sustain the U.N. forces combatting North Korea's incursion. Transportation was best achieved on the Korean rail network, developed by the Japanese during their occupation of Korea during the first half of the 20th century.

In 1950, with the advent of the Korean War, U.S. and allied planners immediately recognized the strategic value of these railroads.  For military purposes, the port city of Pusan was the heart of this network, because it was here that maritime cargo would be transshipped to the railroads' rolling stock.

The majority of military personnel introduced to Korea approached the front lines as close as could be practically achieved by rail. Their journeys started in Pusan, which at the same time was the ultimate collection point of Korean refugees displaced by war. These refugees arrived in Pusan with few resources.  To a large extent, they survived by begging, bartering, or scavenging the refuse generated by the American and other U.N. armies.

Thus is the setting for this photograph. For the thousands of Americans who served in Korea, their first encounter with the Korean people was achieved in this manner.
Posted by Christopher Russell at 5:26 PM No comments: 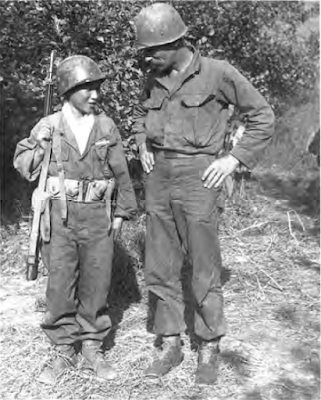 Desperation sometimes begets innovation.  So it was for the U.S. Eighth Army during the opening months of the Korean War.  Late 1940s budget austerity meant that most regiments entered the war at only two-thirds strength.  While replacements were thrown into the fray as quickly as possible, they were not enough to replenish staggering combat losses that the U.S. Army suffered through the summer of 1950.

And so Eighth Army planners devised a solution: infuse the enlisted ranks of U.S. Army units with Korean men - or as it so often was - boys.

Official nomenclature described them as "Korean Augmentation to the United States Army," which reduces to the "KATUSA" acronym.  KATUSAs would be fully integrated into the ranks of U.S. fighting units, thus establishing the means for their care, feeding, and utilization. There was some logic to this concept.  For one, there were plenty of able-bodied men available of (or near) fighting age, right there in South Korea.  And because they were native to the country, these same individuals brought knowledge of the landscape.  On the flip side was a virtually intractable language barrier.

The South Korea government, such as it was at the time, was fully complicit in this scheme.  The "drafting" of KATUSAs began in July 1950. This was often accomplished by constables who simply yanked boys off the street and pitched them onto the back of trucks.  "Basic training" was less-than rudimentary, accomplished in a matter of hours.

The 24th Infantry Division, which was the first U.S. Army unit dispatched to Korea, was in pretty bad shape by the end of August 1950.  The division was placed in reserve to provide its men time to recuperate. It was in this rest camp that KATUSAs were introduced to their organization.  There was no prescription for their use.  Instead, each unit fostered its own approach. In some cases, KATUSAs were limited to menial support tasks. In other cases, they learned to operate weapons; each would be paired with an American in a "buddy system."

The results were mixed, but worthy of refinement.  The Eighth Army continued to employ KATUSAs throughout the Korean War... and after.  The partnership with the U.S. Army remains in place to this day. Its administration is much refined, of course, as it develops a cadre of professional soldiers that become valuable additions to the Republic of Korea Army.

Posted by Christopher Russell at 7:04 PM No comments:

At about 0930 hours on July 20, 1950, U.S. Army Major Newton W. Lantron disappeared during the Korean War’s Battle of Taejon. Army historians claim that he neither gave notice nor instructions to his staff. Lantron simply departed his command post by driving away in his jeep.

Lantron’s exit was curious, to say the least. He was the commander of the 3rd Battalion, 34th Infantry regiment (3/34), which, after only two weeks of combat in Korea, was being thoroughly routed by enemy forces. At first under the command of Lt. Col. David H. Smith, the 3/34 had already suffered formidable casualties in a delaying action at Ch’onan on July 7-8. Whereas the third battalion’s understrength rosters counted about 525 men before Ch’onan, only 175 would emerge from that engagement. Among the losses was Lt. Col. Smith, evacuated due to physical exhaustion.  This made Maj. Lantron the senior officer available in the battalion, and thus its commander.

By July 20, the U.S. Army’s combat presence in Korea was committed to a tenuous front line defense just north and west of Taejon, South Korea. The 3/34 was an integral component of that line.  By this point, the men – and especially, most of the officers – had been functioning for days without proper sleep. This would become evident in lapses of judgment and decision-making. This situation was made worse by poor communications between command levels, a consequence of worn, broken, or otherwise unreliable radios and signal equipment drawn from World War II surplus stocks.

Regimental headquarters became aware of Lantron’s disappearance about two and a half hours later. But by that time, the headquarters staff had more pressing distractions to contend with.  A number of North Korean T-34 tanks had by then infiltrated the grid of Taejon’s streets.  Clerks, cooks, mechanics, medics and other rear echelon men all became riflemen as they encountered enemy infiltrators. Those troops not already fighting for their lives were now preparing a hasty exit, either packing up their trucks or setting fire to what they could not readily transport. In the midst of this confusion, the disappearance of a battalion commander was of no immediate concern. A 29-year-old captain, Jack Smith, was regimental command’s emergency choice to lead 3/34 after Lantron’s disappearance.

Newt Lantron, a tall and lanky 35-year-old Alabamian by birth, joined the Army before World War II. He entered combat as a company commander with the 36th Infantry Division in Italy, only to be captured by the Germans on September 9, 1943. He was interned at Oflag 64 in Poland for the duration of the war in Europe.

The post-war continuation of his Army service placed him by 1950 with occupation forces in Japan, and subsequently, with combat forces in Korea. The enervating crisis in Korea was only exacerbated by the U.S. Army’s unpreparedness, as it lacked reliable and effective equipment, while its men lacked sufficient spirit and physical fortitude for combat. Field-grade officers like Lantron were further stressed by their awareness of top commanders’ impossible expectations. On July 7, division commander Gen. William Dean sacked the original commander of the 34th Regiment’s Korea deployment, Jay Lovless, for an apparent lack of aggressiveness.  Lovless’ replacement, Bob Martin, lasted all of 15 hours as he, armed with an ineffective 2.36-inch bazooka, lost a duel with an enemy T-34 tank in Ch’onan.

Now on July 20, Lantron’s orders were to hold the defensive line north of Taejon until notified to do otherwise. Lantron was in the same fix as Red Ayres, his counterpart who commanded the 34th’s first battalion.  While obediently holding his position through the previous night, Ayres, detected the ominous clatter of enemy armor and troops bypassing his position in the dark.  But without proper command communications, mission assignments were not forthcoming. Like Ayres, Lantron would have to react to rapidly evolving events on the ground around him. A lack of sleep ensured that his decisions did not always comport with sound military doctrine.  These were the circumstances that immediately preceded Lantron’s sudden departure.

The Army suffered staggering losses on 20 July. Lt. Col. Red Ayres managed an effective escape for a portion of his command, which would regroup and continue the fight later that summer along the Pusan Perimeter.  Newton Lantron, however, would not return to duty until September 1953 – three years later.

The U.S. Army would learn, several weeks after the battle in Taejon, that Lantron had evaded the enemy for two or three days before he was taken prisoner by the North Koreans. Other American prisoners would later testify as to Lantron’s heroics in saving the lives of several of his fellow captives, both on the forced march to North Korea and by his food scavenging efforts in the prisoner of war camps.

Having endured two separate wartime internments, Lantron suffered yet again when his son, Netwon Jr., age 24, died of a brain tumor in 1964 while serving with the U.S. Army in West Germany. Newton Lantron, Sr. died in 2003 at the age of 88. 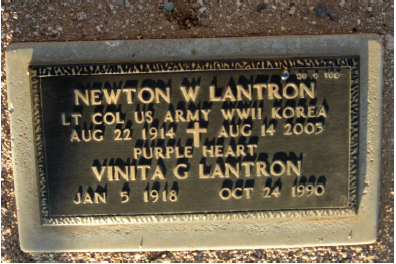 Posted by Christopher Russell at 6:09 AM 2 comments:

1953. South Korea.  U.S. Army Private Philip Thomas Hughes gave his life to protect South Korea and its inhabitants, including these little fellows.  While the identities of these children are unknown, they pose in a scene that reveals the humble, vernacular life style of mid-20th century Korea.  The wattle hut was reasonably durable, as long as someone was diligent about maintaining the thatched roof - hence the ladder leaning on the foundation. The inhabitants of this home maintained a garden with beans and other vegetables.  Its very likely that some domesticated livestock were housed with the family under the same roof. You can guess what the drainage ditch in the foreground was for. To the rear is a rice paddy.  Beyond that are hills - not only ubiquitous features of Korean topology, but also the nemeses of the many American and other United Nations soldiers who scaled these slopes to fight and die so far from home.
Posted by Christopher Russell at 12:57 PM No comments: