I first encountered Philip Hughes in 1995. Or to be exact, I encountered his name on a small memorial plaque in a Catholic church in Rehoboth Beach, Delaware. A reader would note that Philip was “Killed in Korea” in 1950 at the age of eighteen. All other context about this boy and his story was lacking. I figured that he must have experienced Rehoboth’s sun and surf, maybe 40 years before I did. Whatever story this kid had to tell was virtually lost to oblivion, reduced now to an obscure little plaque bolted to a wall.

Inspired by pathos of it all, I would spend over twenty years pursuing this boy’s identity and eventual fate. Philip, I learned, was from my hometown, Washington, D.C. He was an orphan, nurtured by a Catholic community. But he was also a runaway and ultimately, a teenage soldier. Philip would become one of the first and youngest of the U.S. Army troops committed to the Korean War. My years of intermittent research yielded Philip’s story, presented in a book entitled “The Battle of Turkey Thicket,” published in 2018.

This blog was intended to complement and thus promote the book. Even after all those years of research, new factoids arise that would have been included in the book had they been available prior to publication. The passage of time ensures that there’s only so much to know about Philip himself. Inexorably, the blog’s focus increasingly spotlights the gritty details of the post-World War II U.S. military occupation of Japan and the Korean War’s chaotic summer of 1950. The shift in focus left Philip’s memory to once again teeter on the verge of oblivion.

The study of war does nothing for Philip, whose remains have rested in Arlington National Cemetery since February 1952. It can also be a drain on the author. One can study war but so much before it begins to rob the soul. For that reason, and after a period of reflection, I’ve decided that it’s time to stop adding to the blog. The content will remain as long as Google allows it to do so.

It is wholly appropriate, then, to give Philip the last word in this forum. Fortunately, history provides excerpts from his last letter home, written on the battlefield on August 29, 1950. Having survived ten weeks of combat, Philip opted not to complain; rather, he asked his adoptive mother to issue prayers of intercession for the many friends he lost at Taejon, Kochang, and the Pusan Perimeter. That Philip took this approach reveals a selfless character and enduring faith born of deep reflection. For the record, these are Philip’s enduring words:

Do me a favor, Mom.  Pray for all the boys who were killed.

As the inscrutable current of time carries me forward through life, I have learned to take inspiration and solace from Philip’s demonstration of faith. As you read this, I hope that the same words resonate with you.  If so, please join me in ensuring that Philip’s legacy lives on, embodied in prayer to the Holy Spirit embodied in us all.

Peace be with you. 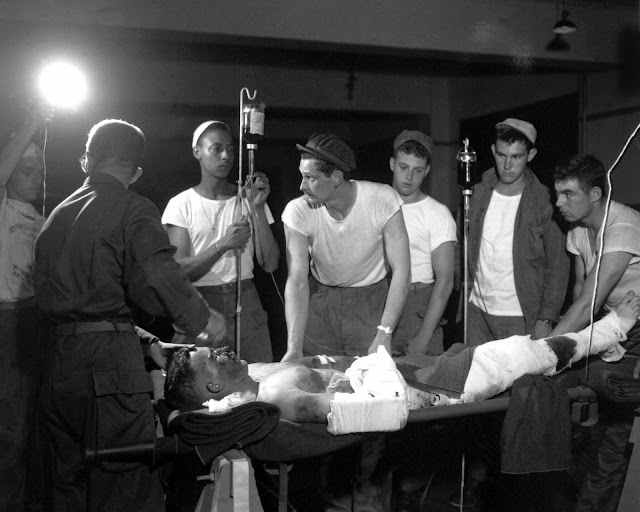 August 17, 1951. 121st Evacuation Hospital, Yongdong-pu, Korea. A seriously wounded soldier of the 116th Engineers is stabilized in a field hospital prior to evacuation for extended retreatment and rehabilitation in Japan.