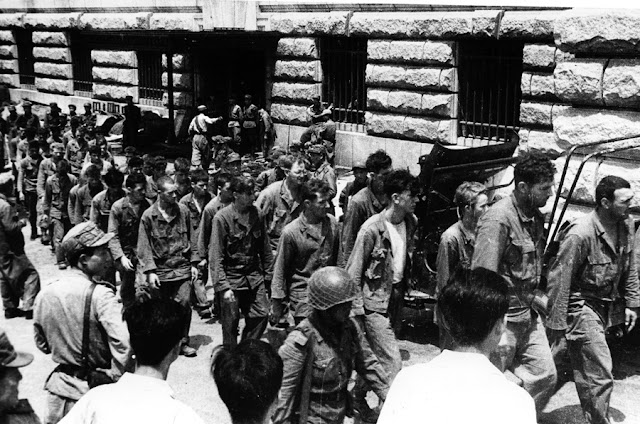 Summer 1950. Korea. U.S. Army soldiers are paraded through the streets of Seoul on their way to a series of improvised prison camps.  Only days removed from peacetime billets in Japan, these men were rushed to Korea in early July 1950 with vague orders to resist the invasion of North Korean forces. Largely unprepared for war, many men paid with their lives within minutes of initial contact with the enemy.  Those who could not beat a hasty retreat were captured, falling under the control of captors who had neither the temperament nor resources to maintain prisoners. The Geneva Convention - an international protocol that attempted to civilize the conduct of war - established a number of prohibitions, including the parading of prisoners for propaganda purposes. Unfortunately, the North Koreans were not signatories of the Convention.  The prisoner of war camps imposed deprivations greater than many men could bear.  Forty-three percent of American prisoners died in captivity.  For the most part, their remains are still interred in unmarked graves in North Korea.  Those who lived to be repatriated brought home emotional scars that gripped for years to come.
Posted by Christopher Russell at 6:31 PM No comments: 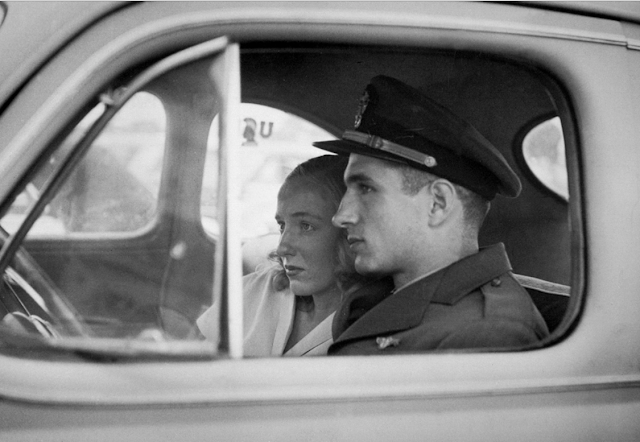 1950. San Diego, California.  This is already a well-circulated image, but it still resonates.  Accompanying facts are few, but imagination allows us to fill in the blanks.  The USC sticker in the car window hints of a peacetime life that has been postponed by the exigency of war.  Central Casting could not have provided a more photogenic couple. Yet their moment evokes poignancy devoid of theatrics. They contemplate an aircraft carrier looming before them. He will momentarily depart to board that ship. It will take him across the Pacific Ocean, where the carrier will take its place with Task Force 77 in the Sea of Japan. From there, the ship and its crew will participate in the Korean War. He is an officer.  He could be a pilot, but the ship requires officers for many other roles as well. We know that she will await his return.
Posted by Christopher Russell at 4:01 AM No comments:

To the Victors Go the Spoils 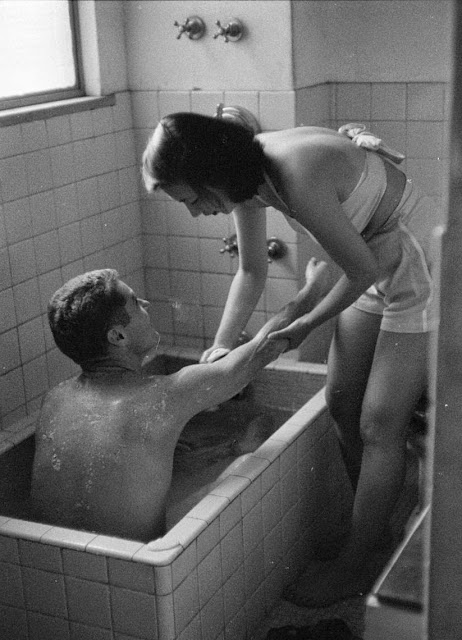 Late 1940s. Japan. As soon as World war II came to a close, American and allied forces initiated what would become a seven year occupation of Japan.  The occupation involved upwards of 350,000 American troops, complemented by lesser numbers of British Commonwealth personnel. They were charged with demobilizing Japan's residual military infrastructure and keeping civic order through the ensuing economic reconstruction.

Having endured four years of ferocious warfare in the Pacific, Americans were astonished that the Japanese offered no practical resistance to their occupiers.  What else could the Japanese do? With a destroyed economy and homelessness at 30 percent, the people of Japan sought opportunity by cooperating with the occupation forces. One of the earliest and most robust opportunities for the Japanese was to offer hospitality services, including restaurants, bars, shops, and ...personal services.

American military personnel were very young; about half were teenagers. They had plenty of disposable income in a land where a little money went a long way. The Japanese learned to tweak their traditional products and services, making them more amenable to American consumers.  The photo above shows an American soldier enjoying bath house services, in this case administered by a lovely female "customer service" agent.

These same young men would serve as the vanguard of U.S. forces committed to the Korean War after June 25, 1950.
Posted by Christopher Russell at 6:54 PM No comments: 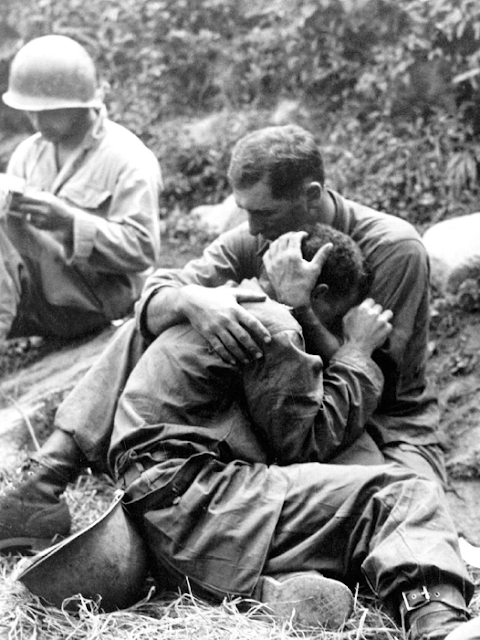 Summer 1950. Korea.  This is one of the more iconic images to emerge from the Korean War.  We see one soldier comforting another who just learned that his best friend was killed in action.  In the background is a medical corpsman tending casualty tags.  I share this because September 12 approaches.  On that date in this year, 2018, we recognize the 68th anniversary of the loss of Pvt. Philip Hughes, killed in action in the vicinity of Hill 300, Kyongju, South Korea. There is no photograph that records the aftermath of Philip's demise.  This image will have to suffice as substitute for him and the 34,000 other Americans whose lives were claimed by that war.
Posted by Christopher Russell at 7:31 PM No comments: