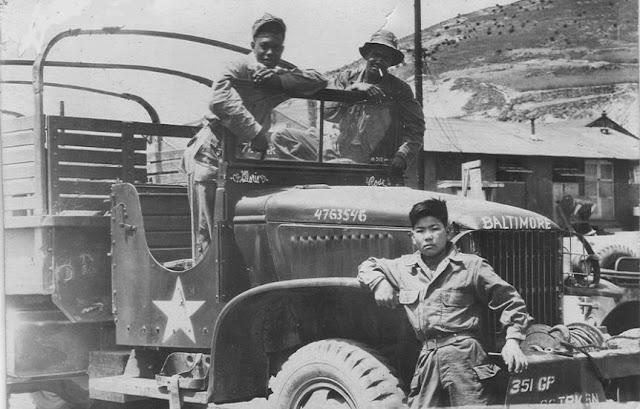 Summer 1950. Korea. Trucks like this GMC deuce-and-a-half were an indispensible component of U.S. Army logistics throughout the Korean War.  In 1950, these and other vehicles were left-overs from World War II.  Some worked better than others. Drivers not only worked long hours, they occasionally confronted enemy guerrilla forces seeking to disrupt the Army's rear-eschelon activities.

Here on the truck, we see Charles Gilmore (left) and Louis Diggs (right), the latter of Catonsville, a suburb of Baltimore. Diggs became an author in his later years.  The young Korean boy with them is unidentified.

This post is as good a time as any to share the U.S. foot soldier's iconic Korean War song, co-opted from a then-popular tune by the Canadian singer Hank Snow. “I’m Movin’ On” was ostensibly a truck driver’s lament rendered with a country swing. The song in its entirety was as innocent as its first verse:

That big eight-wheeler rollin’ down the track
Means your true-lovin’ daddy ain’t comin’ back
‘Cause I’m movin’ on, I’ll soon be gone
You were flyin’ too high, for my little old sky
So I’m movin’ on

“I’m Movin’ On” made its way onto Armed Forces Radio Network broadcasts. It was probably assimilated by drivers of the Eighth Army’s transport companies, who in turn shared it with men all through the combat supply chain, from the port in Pusan to the front lines. Soldiers took the liberty of modifying the lyrics to suit their circumstances. Ruminating on the dreaded strategy of delay and retreat, “Bug-Out Boogie” emerged as the unofficial anthem of fighting men in Korea. The lyrics morphed over time as the Americans fought through the summer and fall of 1950. Immediately cynical and ribald, the modified lyrics unequivocally captured the American soldier’s Korean War experience. One rendition of the song began as follows:

That opening verse was typically modified to implicate the singer’s neighboring organization. By the end of 1950, the lyrics reflected China’s commitment to the fray:

I sung this song for the very last time
Gonna get Korea off my mind
I’m moving on; I’ll soon be gone
I done my time in the shit and slime
I’m movin’ on.
Posted by Christopher Russell at 4:19 AM