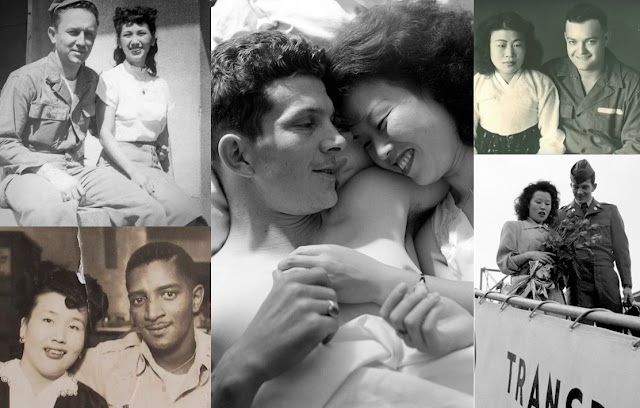 It seems counterintuitive, but war inexorably fosters hints of love in its wake. Twentieth century America propagated cross-national (and often trans-racial) marital unions in unprecedented numbers as a result of its many military engagements across the globe.  Korea alone has by one estimate provided over 100,000 brides for American military personnel since 1945.  In most cases, the  partners endured the admonitions of family, institutional authorities, and prevailing societal norms.  Many of these unions testify to the power of love; in others, it may reveal the lengths to which people go to escape desperate circumstances.

While the "war bride" phenomenon was not uniquely American, if figures that America - which by 1950 stood above all other nations in terms of strength and stature - should foster so many of these unions. One consequence was a reckoning forced on the nation's collective conscience.  After all, the America of 1950 had emerged victorious from a global war with fascism, only to renew the struggle with its own shortcomings, notably the inability to reconcile the promise of freedom with equality among its own populace.  It was into this maw of dissonance that Korean War brides attempted to make new homes in the cities, towns, hamlets, and farms of America.

The choice of marriage was often impulsive, driven by the anxieties that come with being young,  lonely, and afraid. American servicemen had to secure a commanding officer's approval to simply apply for a marriage certificate.  The paperwork - stacked an inch and a half thick - was intentionally made demanding for the typical enlisted man.

The volume of Korean brides arriving on American soil posed legal quandries. Anti-miscegenation laws still prevailed in many states.  The demand for dispensation in the form of waivers was the beginning of the end of such laws. But by the time they cleared the hurdles of institutional racism,  these women were at the mercy of their individual circumstances as they settled into their new homes.  Their experiences were mixed; some brides were luckier than others. Divorce, abuse, and abandonment took a tragic toll.  But there were many other women who through perseverence and wit became successful not only as home-makers, but also as business and civic leaders.  All of them can recount their stories with some mixture of tears and laughter.
Posted by Christopher Russell at 8:07 PM