Road-bound Soldiers of the Korean War 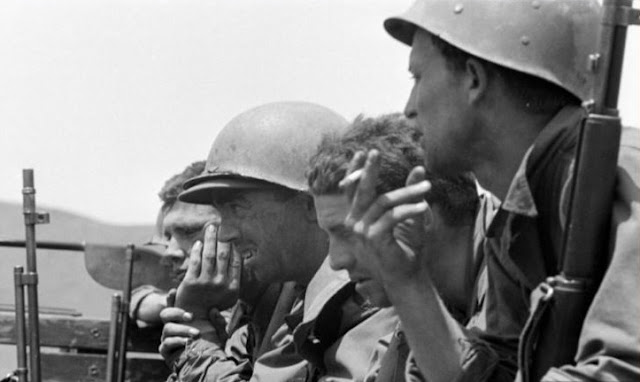 An excerpt from "The Battle of Turkey Thicket."


Philip Hughes and his colleagues scrambled aboard the cargo beds of the regiment’s GMC deuce-and-a-half (2½-ton capacity) trucks. Each truck typically held ten fully-equipped infantrymen, seated on fold-up benches on either side of the cargo bed. In a pinch, with the cargo deck’s gate down, one or two more men could perch on the trailing edge with their legs dangling off the rear. Canvas covers for the cargo beds were removed due to the summer heat.

Noise added to the motoring experience. Like many military vehicles without mufflers, the GMC trucks alternately growled and whined as drivers shifted up through the gears. Passengers had to shout at one another to be heard. A convoy of these vehicles was preceded by its own din.

Despite the improvement efforts of Army engineers, the Korean roads remained narrow and maddeningly choked with civilian refugees on foot. Paved with broken rocks and pulverized by heavy military traffic, the roads coughed up a fine, calcified powder that coated vehicles and the men in them. The trip to Kyongsan could require up to half a day’s driving time.
Posted by Christopher Russell at 3:06 AM