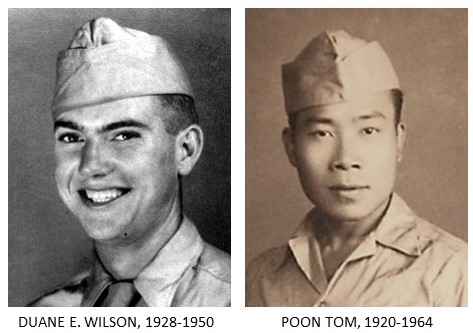 PVT Duane E. Wilson was the third of nine kids born to Edward Wilson, a carpenter, and his wife Nellie. Born in Mt. Vernon, Illinois in 1928, Duane enlisted in the army in 1946. By 1949, Duane was in Japan with the 25th Infantry Division's 65th Combat Engineering Battalion.

Duane apparently had difficulty adjusting to army life, even in the comfortable billets of occupied Japan. He drifted through a series of duty assignments without finding one at which he could excel. Duane committed a number of minor infractions along the way.  His record compelled a commanding officer to consider a discharge from the service.

Sergeant Major Poon Tom decided to intervene. It was February 1950. Tom, born in China but raised in San Francisco, called Duane into his office at battalion headquarters. Tom found that this six-foot-tall, mild mannered kid did not want to part ways with the army. Duane continued to bounce from one duty to the next.  He became a driver for the bridge-building platoon. Tom, keeping a watchful eye, asked Duane how he was doing.  Duane responded positively. More importantly, Tom got no negative reports from the bridge platoon. Then Duane got a clerk assignment in the Headquarters Service Company.  Duane's company clerk role allowed him to see Tom regularly as Duane delivered morning reports and daily dispositions sheets up to battalion HQ. Tom noted that Duane seemed happy and satisfied with his job.

Then came the Korean War. The 65th CEB was shipped to the war zone along with the 25th ID.  Combat deployments reduce the volume of paperwork, so Duane was reassigned to a position serving as the Colonel's orderly. Duane became disenchanted with this task, and requested a transfer to a line company.

Like so many other U.S. Army infantry units in Korea in 1950, the 25th ID was understrength. By August, this unit struggled to hold its share of the Pusan Perimeter from North Korean encroachment.  At its darkest moments, the division had to call up its rear echelon men - including its combat engineers - to join the ranks of rifle companies.

On September 12, men from the 65th CEB supported a two-platoon attack formation attempting to take a hill near Saga.  A North Korean machinegun nest raked the flank of the formation.  PVT Duane Wilson was hit multiple times just below the chest. He died instantly.

The next day, M/SGT Poon Tom wrote a letter to the company file that outlined Duane's experience with the 65th CEB.  Many years later, Tom's son Michael came across a copy of that letter in his father's estate documents.  This blog post draws directly from the document that Michael Tom found and shared on koreanwar.org.
Posted by Christopher Russell at 5:15 PM