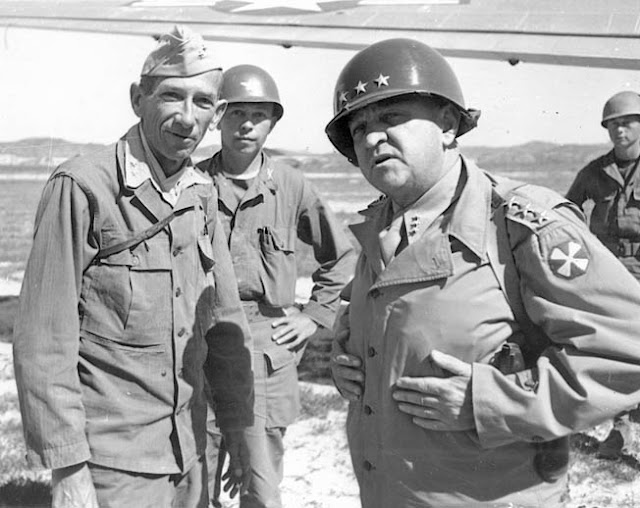 1950.  Korea.  Lt. General Walton H. Walker (right) had the unenviable task of taking soldiers to war in a "come as you are" fashion.  In early 1950, the U.S. Eighth Army had been configured for occupation duty in Japan.  They lacked the tactical training, stamina and motivation for combat.  America's sudden commitment to the Korean War would begin with these men under Walker's command.

At age 60, Walker's resume included everything from the VeraCruz Expedition of 1916 to serving as corps commander under George S. Patton in World War II.  While he was a stickler for polish and decorum, he also had a fondness for liquor that earned him the nickname "Johnnie Walker." All of his experience and moxie would be put to the test in Korea.

Realizing that the Army's occupation troops based in Japan were too few and ill-equipped to stop the North Korean Army's invasion of the south, Walker had no choice but to deploy his forces in a series of delaying actions.  In just under one month, the over-matched American forces were beaten back behind the 140-mile frontier known as the "Pusan Perimeter." Now with their backs to the sea, there were no more opportunities to pull back. Walker knew these beleaguered men had to hold until reinforcements could arrive from the U.S.

On July 29, Walker issued to his division commanders an order in which he demanded that there be no further retreats from the Pusan perimeter.  "We will fight as a team," he said.  "If some of us must die, we will die fighting together... I want everybody to understand we are going to hold this line.  We are going to win."

And as any decent leader should, Walker led from the front. With pilot Mike Lynch at the controls, Walker took to the air in his little L-5 liaison aircraft.  When directly over his troops, at barely more than treetop level, Lynch would throttle the plane's engine back to idle.  Walker then leaned out the passenger-side door with a bull horn in his hand, bellowing a mix of admonitions and encouragement to the troops below.

The Eighth Army held, but at great cost.  Walker would continue to command the Eighth until December 3, 1950, when he was killed after his jeep was side-swiped by a cargo truck.  After Walton Walker was buried in Arlington National Cemetery, he was posthumously promoted to full general in January 1951.
Posted by Christopher Russell at 6:14 PM