The McGovern Brothers: From Washington, D.C. to Korea ...and Back 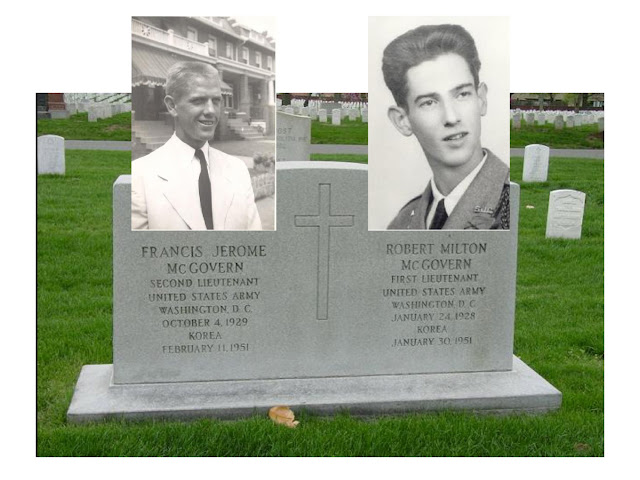 Beyond the monuments and landmarks of Washington, D.C. are a variety of working-class neighborhoods, like the one in which Philip Thomas Hughes was raised. Most were developed between 1900 and 1940. Tourists don't usually see these little villages of shops and rowhouses, simple and cheap to build so that they were priced within reach of government bureaucrats.  Mr. & Mrs. Halsey McGovern and their six children lived in one of these homes, at 4610 New Hampshire Avenue, across from Rock Creek Cemetery. Their house was a little over four miles north of the U.S. Capitol. The McGoverns were devout Catholics who attended St. Gabriel’s Church.

With the unassuming career of a freight-rail tariff analyst, Halsey McGovern’s legacy would be unnoticed were it not for the Korean War, the tragedy that befell his family, and the headlines he generated through an unprecedented act of defiance.

The McGovern sons attended Washington, D.C.’s St. John’s College High School, noted for its Cadet Corps. Brothers Robert (b. 1928) and Francis "Jerry" (b. 1929) were both noted for their leadership abilities, and both quickly found their vocation in the U.S. Army. By 1949, Robert was a second lieutenant with the 1stCavalry Division based at Camp Crawford in Japan, where he committed his free time and resources to support a Franciscan orphanage in Sapporo. Jerry became a platoon leader with the 2ndInfantry Division at Fort Lewis in Washington state.

Robert and Jerome each found his way to Korea under separate commands in late 1950. Each would lead an infantry platoon. In early 1951, both were killed in action, only 11 days apart. They died the same way so many other lieutenants did; each led his platoon from the front while scaling yet another anonymous Korean hill named only by a number denoting its height in meters above sea level.

The Army chose to posthumously decorate the brothers.  Robert’s award was the Congressional Medal of Honor.  Jerry would receive the Silver Star.  The White House pursued arrangements for President Harry Truman to present the awards to the boys’ father in January 1952.  There was one problem: Halsey McGovern, then age 65, refused to accept the medals. He stated to the Washington Post’s Ray Pittman that President Truman was “unworthy” to “confer them on my boys or any other boys.”

Halsey McGovern’s reasons for refusing the medals were not made explicitly clear.  Some strong clues are available, however. The Library of Congress maintains a file of Mr. McGovern’s correspondence, and his letters to newspaper editors are found in the D.C. Public Library’s Washingtoniana collection. These documents reveal the Tennessee-born Mr. McGovern to have been a staunch conservative, the type who perceived communist direction behind the American civil rights movement. It may be that Halsey McGovern was one of the many Americans who faulted Truman for not using atomic bombs in response to communist aggression on the Korean Peninsula. Halsey McGovern recorded such opinions for the rest of his life, until he died in 1983 at the age of 97.

The U.S. Army considers the awards to be conferred.  The actual medals are now on display at St. John's College.  Robert and Jerry McGovern are buried beside each other in Arlington National Cemetery. In May 1952, a ground-breaking ceremony began the construction of the Tenishi-in Boys Home in Sapporo, Hokkaido Island, Japan. It was dedicated to Robert McGovern.
Posted by Christopher Russell at 5:28 AM