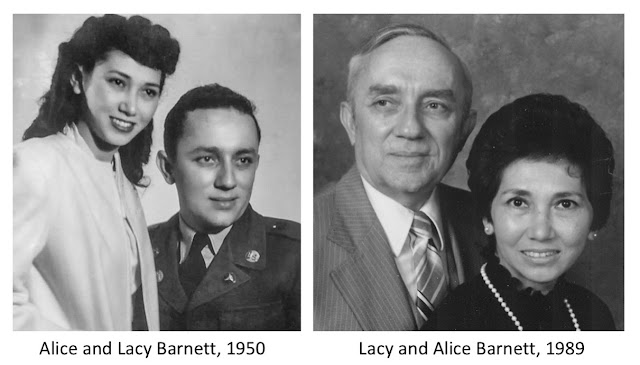 The following was provided by Lacy C. Barnett, age 91 - alive, well, and corresponding via email.  Mr. Barnett was a 23-year-old U.S. Army corporal in July 1950 who, along with Pvt. Philip Hughes, was among the very first American soldiers sent to Korea. Photos courtesy of Mr. Barnett.

The U.S. Army’s ranks in the late 1940s contained a lot of teenagers, especially in post-war Japan. Too young to have served in World War II, many of these boys had older brothers or fathers who did.  These boys were often high school dropouts from humble circumstances worsened by the Great Depression. For many, the post-war Army offered structure and security that their families could not. I was one of those boys.

“The Battle of Turkey Thicket,” by Christopher Russell, follows the story of another of these teenagers, Philip Thomas Hughes of Washington, D.C.  The reader does not get to know much about Philip, but instead gets to see what Philip sees as he uses the Army to escape a disintegrating family life.  By following Philip’s adventures in Japan and Korea, this true story effectively gives voice to the many boys who sacrificed their lives in a war that is now relegated to an obscure corner of American history.

Traditional history books provide the “big picture” story of conflict between nations and the choices made by their leaders.  “The Battle of Turkey Thicket” follows the opening phases of the Korean War from the view of an individual soldier. These pages reminded me of the chaos of those days: the first alert of our deployment from Sasebo at 0100 hours, 1 July 1950; steaming to Korea aboard the Takasago Maru on 2 July; the six-mile hike from the dock in Pusan to Camp Hialeah; and the train ride to front. We used equipment, uniforms, and even food left over from World War II. Unprecedented stress on the Army’s logistics created episodes where the only meals available to men in combat was baby food diverted from commissaries in Japan.

We engaged not only enemy forces, but the discomforts of a swampy climate in an impoverished nation. We endured heat, insects, and water supplies tainted by human excrement used by the locals as fertilizer.  The countryside smelled foul, and within a matter of hours, so did we. As the North Koreans overran our positions one after another, our trucks weaved through masses of southbound refugees who travelled by foot. We shared unpaved roads that were maddeningly susceptible to either dust or mud.

Our beloved 34th Regiment was deactivated on 1 Sep 1950 due to heavy losses. Both Philip Hughes and I were among the regiment’s 184 survivors (out of 1,981). We were then reassigned to the 3rd Battalion, 19th Infantry Regiment.

Philip was an infantryman with K Company of the 19th. That company took a lot of casualties between 8-12 September in engagements on Hill 300.  After surviving the fearsome days of July and August, Philip made the ultimate sacrifice on 12 September 1950.  At that time, I was a member of the medical platoon supporting Philip’s battalion.

Part of my duties were to identify the remains of our boys for subsequent handling by graves registration.  It is very possible that Philip Hughes was among the remains I handled.  Unfortunately, I don't have photographic memory, but I distinctly remember one man brought to our aid station there who was still gasping for breath. Our doctor worked on him, but to no avail. The doctor turned and ordered us to place his remains under a tree.  The man, clinically dead, continued to gasp every 30 seconds or so. For us young medics who had already seen so much, this was still alarming to watch.  Was this Philip Hughes?  We’ll never know for sure.

Devine intention so often distills good from the ills of life. It is my firm belief that without God in heaven looking over and caring for me, I would not be available to relate these thoughts in 2018. Had it not been for my deployment to Japan, I would not have met Alice in April 1949. By early 1950, we were engaged.  I was a 23-year-old kid form the Appalachian foothills of Alabama. She was a 24-year-old clerk-interpreter, the daughter of a Japanese mother and French father.  While not strictly forbidding such unions in those days, U.S. visa laws plus the Army’s deliberate bureaucracy imposed many hurdles intended largely to defeat all but the most determined of couples. Our relief came with U.S. Congressional action in 1951.

After raising two children who themselves are now entering retirement, Alice and I recently celebrated 68 years of marriage.

Can anyone argue that God in heaven has not watched over me?

Posted by Christopher Russell at 5:18 PM