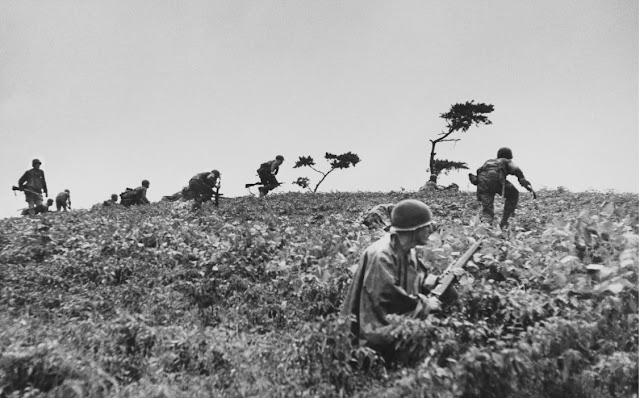 September 1950. Korea.  This is a David Douglas Duncan photo.  Duncan was embedded with the U.S. Marines during his photo-journalistic foray into the opening months of the Korean War. So while the visual cues are few, it's a safe bet that these are marines (the term "soldier" is specific to U.S. Army troops).

Regardless of their branch of service, the American riflemen cast into Korea encountered the same tactical objectives.  The key to victory was control of hills that overlooked the roads.  Without control of the high ground, the truck-bound American forces were unable to traverse the Korean countryside. The rifleman's task during the summer of 1950 was not unlike that of Sisyphus; while Sisyphus repeatedly rolled the same rock up the same hill, the riflemen were resigned to taking a hill only to start all over again on the neighboring hill.  And the next, and the next.

Duncan's image conveys the exertion and fortitude of fighting men.  The man in the foreground wears a rain poncho. Cautious yet deliberate motion is in evidence, displayed not only by the men, but also in the forward lean of the scraggly trees.  We do not know the nature of their enemy's entrenchment, but men moving forward probably don't know, either.  When such information is lacking, speed and aggressiveness fill the void.

This is how U.S. Army Pvt. Philip Hughes spent the ten weeks he was in Korea, the last summer of his life.
Posted by Christopher Russell at 10:40 AM