Appreciation for the P-38 (Can Opener)

When PVT Philip Hughes deployed to Korea in July 1950, his dietary intake was limited almost totally to C-rations.  Like the weapons, uniforms, and vehicles employed by the U.S. Army in 1950, "C-rats" were all war surplus, shipped to the western pacific in 1945 in anticipation of an allied invasion of Japan. C-rats and other materiel were accumulated in post-war Japan; much of it was put to use during the early stages of the Korean War.

Each C-rat carton included six cans of food (sufficient for one day's meals), some rudimentary toiletry items, and a pack of cigarettes and matches.  Also included was a P-38 can opener: a 1.5-inch device fabricated from two pieces of hardened, stamped steel.  It was hinged together so that the tool folded flat for sotrage. It turns out that P-38 could handle a multitude of tasks.

This simple yet brilliant design had a hole in its face that allowed the bearer to thread it on the same chain with his dog tags, thus precluding its loss: 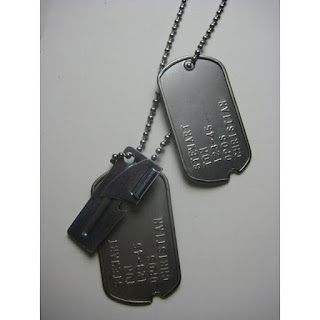 The War Department had its unique bureaucratic nomenclature for this device: "Opener, Can, Hand, Folding, Type I." Aside from opening cans of ham and eggs or franks and beans, the P-38 could  substitute for a standard-head screwdriver when field-stripping a weapon.  One could use it to scrape a mess kit (plate), strip wires, or strike a flint.  If need be, the P-38 could cut the fabric of a wounded soldier's uniform. Or deflate a tire, adjust a carburetor, or pick shrapnel out of a wound.  Need decorations for a combat Chrismas tree? Simply collect a handful of P-38s from your squad.

Originated by the Army's Quartermaster command just prior to World War II, the P-38 emerged from the Subsistence Research and Develoment Laboratory on Pershing Road in Chicago. Leading its development was COL Rohland A. Isaker, a veteran of Army field deployments dating back to the veracruz Expedition of 1916. His first-hand experience from these operations inspired his development of modern methods for food preparation and packaging. Manufacture of the P-38 was alloted to Washburn Company of Rockford, Illinois and the Speaker Corporation of Milwaukee, Wisconsin.  While the total count of P-38 units manufactured is not available, we can be confident that many millions were made.

Posted by Christopher Russell at 2:59 PM