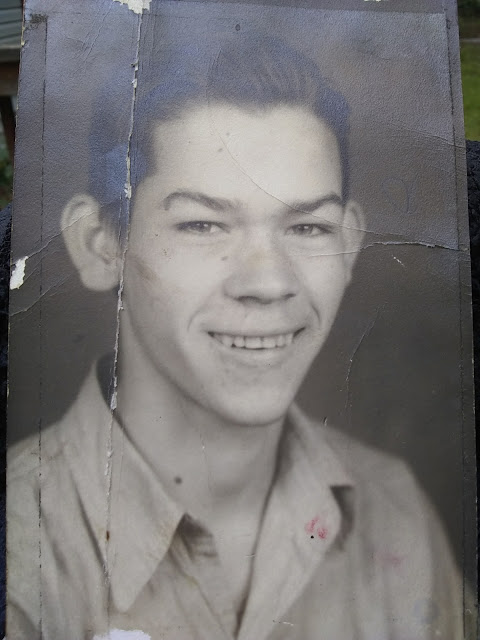 This is Kenny Shadrick from Pineville High School, located near Wyoming, West Virginia. Kenny was the third of ten children, born in 1931 to coal miner Theodore Shadrick and his wife Lucille.  Kenny was an avid reader and an "A" student. He joined the high school football team after his father spent five dollars for his uniform.  In October 1948, the uniform was stolen.  Kenny was so upset by this that he quit school and joined the army the next month. Because he was only 17 years of age, his enlistment required his mother's signature.  Kenny proceeded immediately to Fort Knox for basic training. 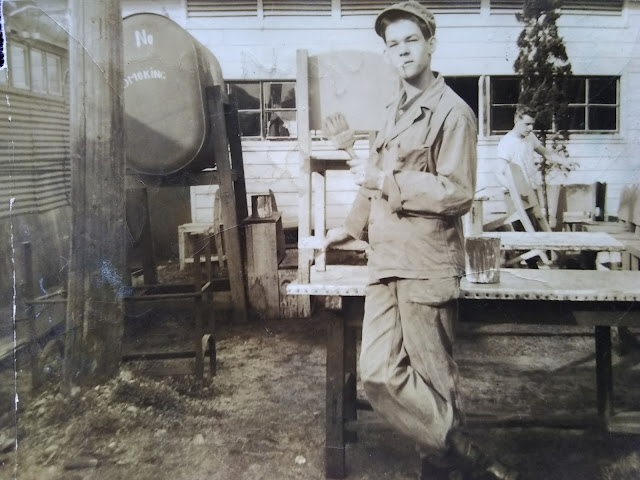 This second picture shows Kenny in the Army, probably in Japan during the occupation, prior to the start of the Korean War. Kenny mailed this photo home to his parents, signed "The Hard Labor Kid." 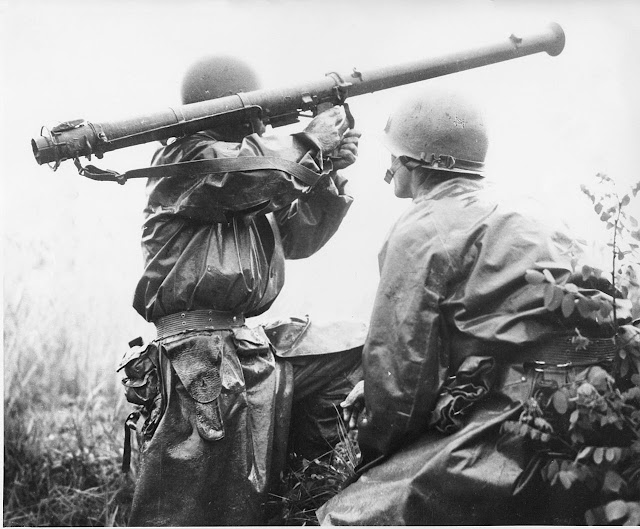 This photo was taken July 5, 1950 by U.S. Army SGT Charles R. Turnbull, who assisted war correspondent Maggie Higgins.  Miss Higgins and a handful of other western reporters witnessed some of the earliest engagements of the Korean War.  The U.S. Army's initial Korea deployment - Task Force Smith - had been overrun the previous day.  The North Korean tanks continued their drive south toward P'yongt'aek and the defensive line established by the 34th Infantry Regiment's first battalion.  Kenny was among the 34th's vanguard of troops facing the NKPA tanks.  As the opposing forces opened fire, SGT Turnbull took this photo of a bazooka team that included Kenny Shadrick (right).  Seconds after this photo was taken, the bazooka operator fired the weapon. Kenny then immediately stood up to observe the projectile's impact.  As he did this, he was struck in the chest and arm by machine gun rounds fired by one of the tanks.  Kenny died within minutes. There's another photo of Kenny lying in a ditch after he was shot, but I'll spare you that one.

Maggie Higgins deserved great credit for putting herself in harm's way to generate good stories.  But either she or her editors exercised poor fact checking.  As a consequence, Kenny Shadrick was memorialized in the July 17, 1950 edition of Life Magazine as the "First American soldier killed in Korea."  That misinformation is often repeated to this day.  That label fails to account for the dozens of casualties from Task Force Smith.  That's not to take anything from Kenny Shadrick, the "Hard Labor Kid."  At least Kenny's remains were recovered and sent home, where he was buried in the Blue Ridge Memorial Gardens in Prosperity, West Virginia.

Posted by Christopher Russell at 9:00 PM