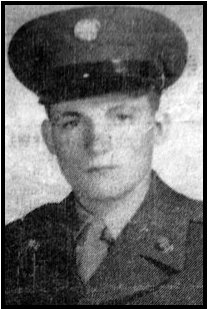 On Tuesday, August 1, 1950, Homer "Jesse" Sprankle could finally take a breather.  Like all the other American soldiers tossed into the opening days of the Korean War, Jesse was by now hungry and debilitated by dysentery.  He wrote home on this day to his brother Harry, back in Punxsatawney, Pennsylvania. Jesse pleaded for a box of food. Anything but those five-year-old C-rations. Harry, a veteran of the Second World War, appreciated his little brother's predicament.

Just the day before, Jesse, Pvt. Philip Hughes, and the rest of the U.S. Army's 1st Battalion, 34th Infantry Regiment withdrew from contact with superior numbers of North Korean Peoples Army troops approaching Kwanbin-ni, just west of the Naktong River. The American unit lost a few more lives in the process. The men now awaited their turn to hop one of the deuce-and-a-half cargo trucks for a lift across the Naktong River. Here, they would form one last line of resistance against the encroaching NKPA. Per order of General Walton H. Walker, there would be no more retreat from this line.

Jesse was age 18. His life was already unsettled due to the dissolution of his parent's marriage. Jesse fled Punxsutawney in 1946 after he was caught having sex with his girlfriend. At this point, he lied about his age to enlist in the Army. Jesse never learned that his girlfriend became pregnant, and that she put their son up for adoption.

All that was in the past.  Jesse was making history as he and his colleagues prepared a last-ditch defense of South Korea from a part of the battlefield now known as the "Naktong Bulge."  Just one week later, on August 8, Jesse was part of a contingent detached from the 34th Regiment's Company B to give protection to a battery of artillerymen imminently threatened by NKPA encroachment.  The riflemen got there too late; the artillery unit had already begun to withdraw under fire.  Surviving artillerymen merged with the assisting infantry to effect an armed retreat. It was in this action that Jesse Sprankle was killed.

Back in Pennsylvania, Jesse's brother Harry promptly mailed a package of edibles as soon as he got Jesse's letter.  We don't know if the package was returned to the sender, or if Jesse's colleagues got to enjoy the contents.

Posted by Christopher Russell at 4:14 PM