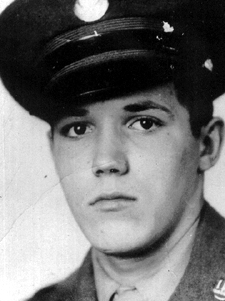 Edward Marshall “Buster” Morrison was a big kid from a big family, the fourth of nine children. “He didn’t take no lip from nobody,” his brother Joe said years later. Raised in Ashland, Wisconsin, Buster grew up hunting, fishing, delivering newspapers, and ice skating on Lake Superior. This good-looking boy enjoyed hand-holding with a few girlfriends. Ultimately, however, Ashland bored him. He joined the Army in anticipation of seeing the world. He joined the thousands of teenaged U.S. Army soldiers billeted in Japan during the post-WWII occupation.  Then came Korea: Buster was deployed along with Philip Hughes as a rifleman with Baker Company, 34th Infantry Regiment.  That unit’s initial combat assignment on July 6, 1950 was to blockade the North Korean Army’s advance from a defensive position on a hill just north of P’yongt'aek. The Americans were out-numbered and out-gunned.  A survivor of that engagement says that Buster, age 19, was killed at his fighting position. That battle led to the Americans' hasty and disorganized retreat to Ch'onan, where another battle awaited them. Buster’s remains are still unaccounted for.
Posted by Christopher Russell at 3:37 AM